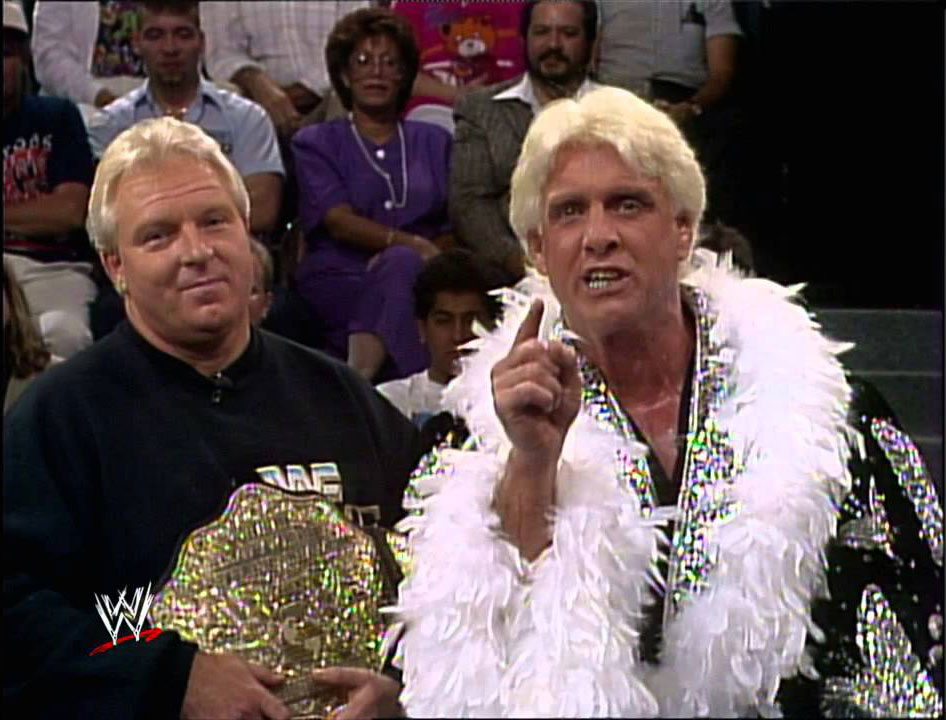 In yet another reminder that the college football season cannot arrive soon enough, a page on AuburnTigers.com is causing a flap. Auburn showed off its hubris in retroactively claiming the 1993 national championship, and perpetuated a type of carny attitude in the sport similar to the attitudes of professional wrestling.

College football’s various, disputable claims of national championships are not unlike Ric Flair’s 1991 arrival to the World Wrestling Federation. Flair showed up on the scene with the World Championship Wrestling title and garnered instantaneous heel (bad guy) reactions for claiming himself the “real” world champion.

The 1993 national championship is indeed a point of contention, though previously not because of Auburn. The Tigers were serving an NCAA-mandated bowl ban during their perfect run. Rather, Notre Dame had a claim to stake to Florida State’s crown.

The Fighting Irish handed the Seminoles their only loss of the season in a 31-24 classic at Notre Dame Stadium. The Irish would have faced Nebraska in the Orange Bowl, the de facto national championship game, were it not for a loss the following week at Boston College.

Notre Dame regrouped to beat Texas A&M in the Cotton Bowl, 24-21, and finish with the same record as the “national champion” it beat. Texas A&M was Notre Dame’s third straight ranked opponent, and fourth ranked opponent of the season. That’s noteworthy, because that’s double the amount of ranked opponents Auburn faced on its way to a perfect mark.

And even with the loss at BC, Notre Dame’s wins over ranked opponents still trumped that of Auburn. Likewise, Florida State played seven ranked teams and beat six.

So if an SEC program claims a championship despite playing a demonstrably weaker schedule than those crowned, it sparks an interest debate. The SEC was among the leading advocates for rewarding teams on its quality of schedule during the BCS years.

If the parameters for retroactively declaring a national championship are arbitrary, why shouldn’t others follow suit? Ohio State’s 2012 team is perhaps easiest parallel to make, but the 2008 Utah Utes may in fact be the more appropriate case-study.

Utah finished its regular season undefeated, along the way knocking off BYU, Oregon State and TCU. All three finished ranked in the Top 25. Oregon State also handed USC its only loss. The Trojans finished the season ranked No. 3 in the Associated Press Top 25 and No. 2 in the USA Today Coaches Poll.

But the Utes true claim to the national championship comes from their thoroughly dominant, 31-17 defeat of Alabama in the Sugar Bowl. The Crimson Tide were 12-0 through the regular season, only falling to Florida in the SEC Championship Game—which has been the national semifinal since 2006, for all intents and purposes.

Utah earned first-place votes in both the final Associated Press Top 25 and USA Today Coaches Poll. The Utes’ showing in the former was the best for a non-BCS champion since USC’s split championship with LSU to end the 2003 season.

There is also a delicious irony to Utah capping its season against Alabama. Auburn may have taken its cues to claiming the 1993 national championship from the Crimson Tide, which boasts 15 titles. At least three are disputable.

Boise State might also consider staking retroactive claim to the 2006 national championship. While the Broncos did not build a resume comparable to that of Utah two seasons later, Auburn’s 1993 national championship sets a precedent contradictory to the long-held doctrine of the BCS era: record over schedule.

The Broncos finished the year with an unblemished record, making it the only team in the Football Bowl Subdivision to do so after Florida’s title-game rout of Ohio State.

Florida hoisted the crystal ball as a result of its BCS Championship Game win, starting a seven-year run of SEC dominance.

But consider this: Florida may not have appeared in the BCS Championship Game, were it not for Oklahoma’s 34-33 loss at Oregon in Week 3—a game that was tarnished by officiating so awful, it would have left pro-wrestling referees scratching their heads.

Oklahoma ended its season in the Fiesta Bowl, where it lost a 43-42 overtime decision to? Boise State.

Other than facilitating some artificial chest-thumping among fans, staking unsubstantiated claims to national championships really doesn’t accomplish anything. Still, if this means Kyle Whittingham or Chris Petersen can carry around a Big Gold Belt and call themselves “REAL champions,” I’m all for it.