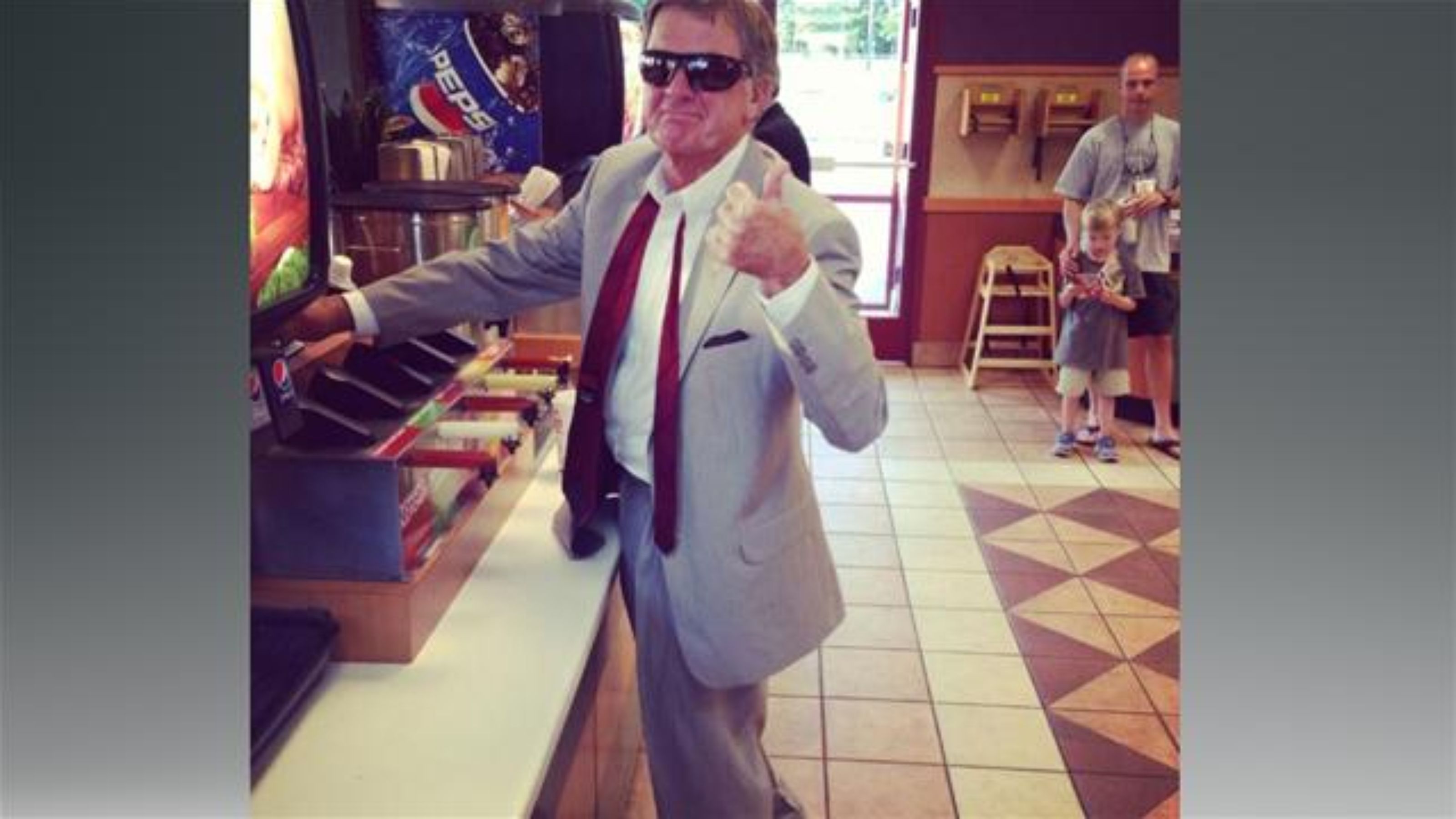 Q&A Day returns and, I must say, itā€™s quality over quantity. Dominating the college football landscape in what would otherwise be a slow time of the year are SEC media days, the annual event that seems to get longer, start earlier, and feature more absurdities every year.

Apparently, the nearly 1,300 media-a term applied more loosely in some cases-is yet another thing for which SEC honks can go scoreboard on their counterparts.

What ya got ACC Media Days? RT @SECNetwork: 1,267 media members are in attendance this week at #SECMD14. Yes, that's a record.

Itā€™s understandable why so many people endure the four-day event: SEC football is home to some of the most compelling characters in college football. Two in particular seem to steal the show every year: Steve Spurrier and Les Miles.

When it comes to Les Miles vs Steve Spurrier, one particular debate is worthy of more discussion than any other:

@kensing45 who would you rather have a beer with, Les Miles or Steve Spurrier?

Just a tremendous question with no easy answer. Les Miles vs Steve Spurrier; itā€™s like being asked to pick a favorite grandpa. And if weā€™re adding a couple cold ones to the mix? Iā€™ll defer to Ron Burgundy:

One canā€™t make a snap-judgment on something so important, so we have to break down the pros and cons of each.

• His mini-golf celebrations suggest heā€™s a man who knows how to party.

• Heā€™s a basketball fan, so we can mix up the sports conversation.

From one Ohio native to another, welcome home @KingJames. LM

• Les Miles is a lover, not a fighter.

• His clock management suggests heā€™d show up either a few hours too early, before Iā€™ve had a chance to get showered-or a few hours late as the party is winding down.

• Assuming weā€™re drinking beers on the golf course, I could learn a thing or two.

• Tell me this man doesnā€™t love to party: • There is a distinct possibility heā€™d bring Ric Flair.

• A steady stream of playful but all-too-real quips at my expense would shake my fragile self esteem.

• Spurrier is likely to demand a wrestling match.

Iā€™m copping out. I canā€™t pick one over the other because frankly, getting together with both is

I envision something like Stone Cold Steve Austin, Hulk Hogan and The Rock toasting in the ring at WrestleMania 30. I realize fault in this analogy, as it suggests Iā€™m one of the three legends. If Spurrier is Hogan and Miles is Stone Cold, in no way am I The Rock. Iā€™m probably more akin to the Brooklyn Brawler.

But hey, I can dream. Right?

@kensing45 who would you rather have a beer with, Les Miles or Steve Spurrier?

The above can be reworded as a Pac-12 vs. SEC recruiting question, as much as it is In-N-Out vs. Chick-Fil-A. …Or can it?

No doubt Chick-Fil-A is associated with the SEC. The restaurant chain sponsors the recently re-re-named Peach Bowl, a longtime postseason destination for SEC teams. Itā€™s also host of the Chick-Fil-A Classic, the opening weekend game in the Georgia Dome-site of the SEC Championship Game-that always features an SEC team.

And yet, Chick-Fil-A is as much a national chain as, say, Jack-in-the-Box. I can drive 10 minutes or less north, east or south from where I live in Southern California and get to a Chick-Fil-A. Hell, my Pac-12 alma mater had a Chick-Fil-A in each of its two student unions.

In fact, Chick-Fil-A has locations in every state within the continuous 48 except Connecticut, Rhode Island, Maine, the Dakotas, Montana, Oregon and Nevada.

In-N-Outā€™s reach has expanded beyond its California origin to Nevada, Arizona, Utah and Texas. But thereā€™s still an exclusivity to it Chick-Fil-A lacks.

Moreover, In-N-Out is terrific. I can eat far fewer Animal Style fries now than I could in my college days, which is annoying since an In-N-Out opened within walking distance of my house just weeks ago.

But for a college football player burning several thousands calories in workouts each day, one need not wear about love handles and jowls. I give the nod to In-N-Out.

@kensing45 Which conference's FCS call-ups will have more success the next 10/20 years, Conference USA or the Sun Belt?

Iā€™m on the record as loving the potential for Conference USA members UT-San Antonio and Old Dominion. Both have been successful in very limited existences. Both are in major metropolitan areas without professional football. Both are surrounded by outstanding high school football, thus have deep, local talent pools from which to recruit.

Whatā€™s more, each city seems to have taken to its respective program. UTSA draws healthy home crowds at the Alamodome, averaging around 30,000. Old Dominion consistently sells out Foreman Field.

And neither program faces any substantial growing pains in their respective FBS moves. UTSA finished above .500 in 2012 and 2013, and I anticipate the Roadrunners making a bowl game in 2014. Old Dominion should be a surprise in C-USA East this year. As for future C-USA counterpart Charlotte, Iā€™m adopting a decided wait-and-see approach.

Georgia State has similar potential, though the Atlanta football scene is more crowded than San Antonio or the Tidewater. Not only are the Panthers vying for recognition in the heart of SEC Country, but they share a home venue with the Atlanta Falcons. And, in 2015, Kennesaw State debuts its football program.

The Panthers have also had a much rockier initiation to college football, last year going a dismal 0-12. Trent Miles is the man to get the program on the right track, but itā€™s not an easy job.

Appalachian State and Georgia Southern were the quintessential FCS powers. I worry jumping to FBS may prove more comparable to Marshallā€™s move up than Boise Stateā€™s-without the benefit of Marshallā€™s initial run.

The Thundering Herdā€™s initial I-AA dominance carried over into the MAC, where they marched to an unbeaten record in 1999 and appeared in classic conference title games in 2001 and 2002. But Marshall went through a lull period that is just now back on the upswing.

Of the Sun Belt call-ups, I like Texas Stateā€™s immediate potential the most. San Marcos is one of the fastest growing areas in the country and the local recruiting scene is booming.

Ultimately though, C-USA call-ups UTSA and Old Dominion are best positioned to thrive in the coming years.