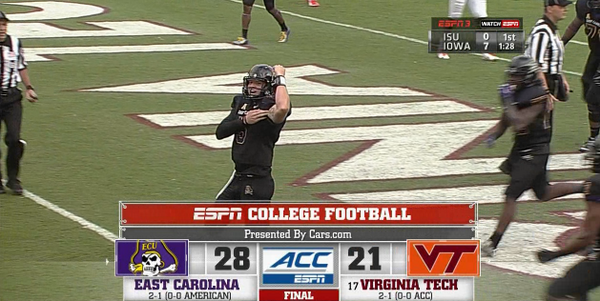 The American Athletic Conference is something of the conference without a nation, so when East Carolina beat Virginia Tech Saturday in Blacksburg, it’s somewhat fitting that it was a Pirates’ flag flying high over ACC Country.

The American’s dynamic in the revamped college football landscape is unique. For all intents and purposes, it’s part of the Group of 5. But it doesn’t necessarily fit the same mold as the other four leagues left outside of the access lane into the College Football Playoff.

When it was the Big East (and for its inaugural season under the new banner), the American was the sixth of the “BCS conferences.” The rest of those leagues remained seated at the same exclusive table, but the American was jettisoned off.

But the leagues it joined as a result-leagues like the Mid-American and Mountain West-were those that most lamented the Big East’s automatic entry into the top tier of bowl games.

When the Big East was sending teams like Pittsburgh in 2004 and Connecticut in 2010 to BCS bowls, the other Group of 5 conferences’ fates were left to the computers’ will. Think then-WAC, now-MWC members Nevada and Boise State were more deserving of the Fiesta Bowl spot gifted to UConn?

So the American doesn’t necessarily fit in with the other four conferences in the Group of 5, it’s locked out of the upper echelon with the Power 5.

Yes, the Big East/American technically won a BCS championship. Of course, it was won by Miami, which left for the ACC in 2005.

Big East football also produced a national championship runner-up, led by one of the most exciting quarterbacks of the BCS. And that would be Michael Vick, star of the Virginia Tech Hokies.

Thus when East Carolina went into Blacksburg Saturday and knocked the No. 17-ranked Hokies off their perch, the Pirates didn’t just score revenge for last season’s loss in Greenville; they raised a flag for the entire pirate conference.

The ACC has stocked up for the college football arms’ race at the American’s expense, adding Va. Tech, Miami, Boston College, Syracuse and Pittsburgh, all in the course of a decade. The most recent Big East/American-to-ACC migrant, Louisville, was

The American went elsewhere to supplement its remaining ranks, and East Carolina was one of the new additions.

Ruffin McNeill looked fly when he played for East Carolina in the '70s pic.twitter.com/NhReeKMxlo

McNeill, an East Carolina alum, has an opportunity to make quite the mark with his alma mater this season. Knocking off Virginia Tech just one week removed from the Hokies’ upset of Ohio State makes the Pirates a team to watch for one of that premier bowl bid offered to the top Group of 5 team.

Of course, the Pirates have to navigate the waters of the American. But with quarterback Shane Carden navigating the ship, the outlook is good. Carden accounted for all four of East Carolina’s touchdowns, including the game winner. His 427 yards passing were exactly 100 more than Ohio State’s total output against Bud Foster’s ballyhooed defense.

With Saturday’s win, East Carolina heads into American Athletic play with an impressive profile. In turn, the Pirates helped boost the profile of its whole, new conference.