Home / Big 12 Football / C-USA Football / Headlines / Are We Destined for Another Week of Upsets?

We’re just a fortnight removed from one of the most chaotic weekends of college football in recent memory and many of us are still catching our breath. Best get your second wind soon, because Week 8 has the potential of turning the landscape on its head once again.

The prime target for another round of College Football Playoff impact upsets falls squarely on the Big 12. I already broke down K-State at Oklahoma Star Wars style, but Jedi Bill Snyder’s encounter with former Padawan Bob Stoops is just one matchup that could significantly alter its championship dynamic.

Art Briles’ supercharged offense always seems to take it to another level against West Virginia’s porous defense. The Bears have hung 136 points on the Mountaineers in the last two seasons. One-hundred and thirty-six!

With Bryce Petty coming off a six-touchdown performance in Baylor’s coming-from-behind win over TCU, what’s likely to slow down Baylor on this year’s visit to Morgantown?

Well, maybe nothing. But hey, you only after score more points than the opponent, right? West Virginia’s certainly capable of putting up points.

Mountaineers quarterback Clint Trickett is thriving in Dana Holgorsen’s pass-happy system with a completion rate over 68 percent, 2,203 yards and 12 touchdowns. It certainly doesn’t hurt that Trickett is throwing to Kevin White, the nation’s most statistically prolific receiver.

And before labeling West Virginia a pass-primarily team in the vein of a Mike Leach-coached squad, note that Rushel Shell and Wendell Smallwood are both coming off 100-plus-yard performances in the Mountaineers’ rally to beat Texas Tech.

Both teams are coming in off unlikely rallies, so Baylor isn’t at a disadvantage in that regard. However, the Bears are making the most exhausting trip on the Big 12 calendar for an early kickoff time. I suspect plenty of those in attendance at Milan Puskar Stadium will be starting their pregame right around…oh, now.

A raucous and inhospitable crowd welcomes Baylor into a decided trap.

Very quietly, Oklahoma State has gone undefeated since its Week 1 near-miss against defending national champion Florida State. Obviously having to regroup to beat Kansas and its interim head coach isn’t going to make much noise.

But the Cowboys’ unbeaten run cannot fly under the radar any longer if they steal a road win at TCU. The Horned Frogs are certainly ripe for the picking, coming off the emotional rollercoaster that was beating Oklahoma on Dark Horse Saturday, then losing a gut-punch of a contest at Baylor.

Giving up a 21-point lead, as TCU did last week, is the kind of outcome that can badly derail a team’s season. The Frogs’ response this week will say a lot about the outlook for the remainder of their season. Get the win, and they’re still firmly in the Big 12 title and Playoff hunt.

Lose, and the possibility of things derailing to the point of a disappointing 8-win campaign looms.

Likewise, Oklahoma State sets an important tone this week. The meat of the Cowboys’ schedule is coming up with November road trips to K-State, Baylor and Oklahoma.

Switching gears from the Big 12, a program that once shared a conference with several current Big 12 members, Arkansas hosts Georgia.

Arkansas is the best team without a conference win in the last presidential term. Faint praise, I realize, but it’s not intended as a slight. Quite the contrary: Bret Bielema is a doing a terrific job in Fayetteville, and the Razorbacks very much have the look of spoilers for someone in the SEC this season.

They led Texas A&M by two touchdowns in the fourth and very nearly derailed Alabama’s hope of winning the SEC West.

Coaches early into rebuilding projects often talk of learning to win. Arkansas is still learning to win against quality opponents, as the last two weeks suggest. But the Hogs are oh-so-close, and this could be the week they breakthrough.

Georgia rallied without Todd Gurley last week, playing its best defensive game of the year and leaning heavily on freshman Nick Chubb. Arkansas is frankly a more talented team than Missouri, however, and its defense poses a stiffer challenge to the first-year running back Chubb than Mizzou’s.

The Bulldogs’ 12th ranked run defense faces a real challenge in containing the Arkansas backfield tandem of Alex Collins and Jonathan Williams, both of whom average better than 6.5 yards per carry.

To borrow a term from legendary broadcaster Jim Ross, this one promises to be a true slobberknocker.

Marcus Mariota is back at the forefront of the Heisman race, the Ducks are once again in the mix for the College Football Playoff and order is restored to the Pac-12. Right?

Oregon returns home from trouncing UCLA in a decision much more lopsided than the final score indicates, the effects of a home defeat to Arizona seeming shaken off. The return of Jake Fisher to a badly dinged offensive line completely transformed the Ducks’ offense from what it was in the Week 6 loss, but Oregon’s front faces a much more formidable task this week against Washington.

The Huskies are been unpredictable and at times erratic while adjusting to new head coach Chris Petersen. But one consistency throughout the first half of the Petersen era is the defense’s ability to get to opposing quarterbacks.

Washington averages four sacks per game, with drop-end linebacker Hau’oli Kikaha’s 10 leading all of college football. When it isn’t Kikaha bearing down on signal callers from one side, end Andrew Hudson is coming from the other. Oh, and opposing lines also must worry about Danny Shelton coming up the middle. Shelton has a ridiculous seven sacks from the tackle position.

All that pressure can force turnovers, and no one in college football is more adept at turning takeaways into points than Shaq Thompson. His four defensive scores are the most for any individual player in the FBS.

We’ll truly know if Oregon’s offensive line, and thus its national title hopes are back after Saturday. If Washington can break the Ducks’ front, the Huskies will also break a decade-long losing streak in this cross-state rivalry. Oh-and they’ll also break into the Playoff conversation.

A Conference-USA East division visit to FIU is a homecoming for much of the Marshall roster, including Heisman dark horse Rakeem Cato. But the emotions inherent with a return home, combined with a surprisingly solid opponent in FIU, could render the Herd’s place in the Top 25 short-lived.

FIU has two of the nation’s leading pass rushers in Michael Wakefield and Denzell Perine, who have combined for 11 of the Golden Panthers’ nationally ninth-ranked 21 sacks. (I’d be remiss if I didn’t point out Wakefield and Perine were Mario Cristobal recruits, so FIU’s sudden resurgence isn’t any testament to Pete Garcia’s dismissal of the program’s only winning head coach).

Administrative decisions at FIU aside, the Golden Panthers pose a real threat to Marshall’s undefeated season. What Should Ohio State Do With Braxton Miller?

Most coaches would kill to have one star quarterback. Ohio State has two. This would seem like a non-issue for… UPDATE: In one of the worst decisions ever made by mankind, Justin Hardy has been left off the Biletnikoff Award semifinalist… 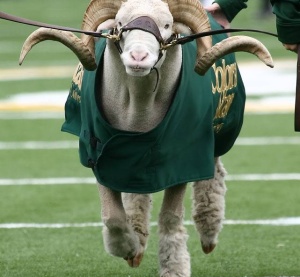 Winners of seven straight, the Colorado State Rams (8-1, 4-1) are becoming a dominating force in the Mountain West Conference…