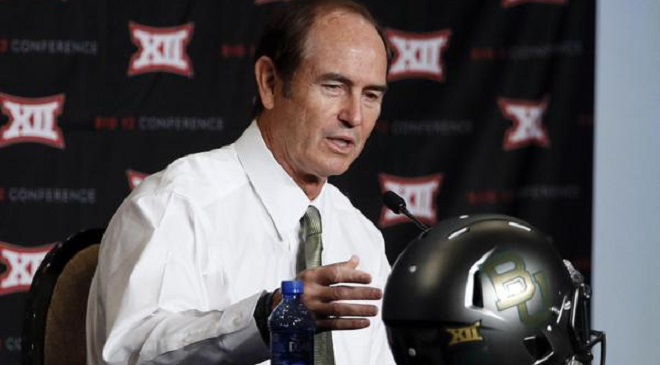 On the same day Ukwuachu was sentenced to six months in jail and 10 years of probation for the rape of a former Baylor women’s soccer player, a retelling of Art Briles and Chris Petersen’s conversation obfuscated matters.

It started Friday morning with Briles’ meeting with reporters, in which he asked if anyone wanted to “talk about football.”

Art Briles: "I talked with Chris Petersen personally. No mention of anything beyond Sam being depressed, needing to come home."

That prompted the below statement from Petersen:

Subsequently, Briles and Baylor issued both a thorough response and paperwork received from Boise State compliance upon BU recruiting Ukwuachu.

Little’s resolved as a result of either side’s statements.

The Art Briles and Chris Petersen back-and-forth does nothing to undo the damage done to the young woman Ukwuachu raped. This does, however, underscore the need for an independent oversight of transfers in cases of off-field violence.

The 5-star Rosen and junior Jerry Neuheisel have jockeyed since spring to replace three-year starter Brett Hundley. Asiantii Woulard once competed for the job, but opted to transfer to USF in June.

While Mora hinted at naming a starter next week, the competition may not be resolved publicly until the Sept. 5 opener against Virginia. Don’t be surprised to see both quarterbacks get snaps against the Cavaliers.

While the UCLA quarterback competition remains shrouded in some mystery, Boise State’s appears to be just about wrapped.

Cripe describes highly touted freshman Brett Rypien having a scrimmage that was quite freshman-like, with a touchdown pass and “ugly” interception.

SIGHTS AND SOUNDS OF FALL CAMP

Fall camps around the nation will close up over the weekend, as teams transition into their traditional game day prep with opening kickoff just two weeks away.

Clemson isn’t far behind that tier of Playoff favorites, but Appalachian State is working to repeat history when it visits Death Valley in Week 1.

Oklahoma’s season opener marks the re-debut of the air-raid in Norman. New offensive coordinator Lincoln Riley’s system promises to notch a whole lot of touchdowns, but none will be more special than the first.

Riley made sure of that Friday when he offered a dedication for the Sooners’ first touchdown of 2015.

Riley is one among scores of coaches at new programs this training camp season. At Pittsburgh, first-year head coach Pat Narduzzi has generated buzz.

The Panthers open 2015 against another head coach at a new home, Bo Pelini and Youngstown State. Their preparations for Bo and Co. are underway.

Across town, Robert Morris is rebuilding from a 1-10 finish in 2014. The Colonials are among college football’s dreamers, whose fall camps are the embodiment of renewed hope.