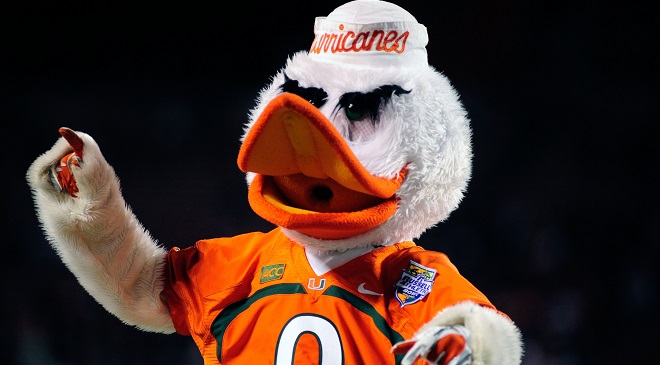 Miami opens a critical season for head coach Al Golden with six pivotal games out of its first eight, and no Gus Edwards at running back.

Gus Edwards, one of the candidates to replace star Duke Johnson as Miami’s No. 1 back, sustained a season-ending foot injury per Christy Cabrera Chirinos of the Sun Sentinel.

Golden said in a statement:

“He set a high standard and did a great job leading and being unselfish. We are tremendously disappointed for him, but we will be there with him on the road to recovery and anxiously await his return.”

The Hurricanes have the players to operate a running back-by-committee even without Gus Edwards. Joe Yearby, Trayone Gray and Mark Walton remain in the mix, and Yearby is the top returning rusher of the four. He gained 509 yards on 86 carries in 2014 and proved effective as a pass-catcher.

Still, the Hurricanes will miss Gus Edwards’ potential in goal-line and short-yardage situations. He also showed off big-play ability in limited opportunities.

Miami opens with two virtual slam-dunk wins against Bethune-Cookman and FAU, but it gets dicey for several weeks to come. The ‘Canes host Nebraska in Week 3, travel to Cincinnati on Oct. 1 and open ACC play against Florida State, Virginia Tech, Clemson and Duke.

We’ll have a pretty good sense of where Miami and Golden stand midway through that six-game stretch.

The superlative labels often applied to athletic accomplishments in this era are watered down. The reactionary manner in which we in the media define something as “greatest ever” dilutes achievements truly befitting such a description.

Aguayo has made all 149 of his point-after attempts and 48 of his 52 field-goal tries. His 98 percent success rate so far on all kicks would put him ahead of the 96.7-percent clip that Nebraska’s Alex Henery posted on his way to setting the major-college career record from 2007 through 2010. His 92 percent make rate on field goals is also ahead of Henery’s career mark in college of nearly 90 percent.

A Season of Change for Oregon State RB Storm Barrs-Woods

A new head coach implementing a new offense account for just some of the changes Oregon State senior Storm Barrs-Woods takes on this season.

I profiled the Beavers’ offensive leader at Today’s U., as he goes from complementary piece in a pass-heavy attack to cornerstone in a rush-oriented offense.

Arkansas athletic director Jeff Long carries a lot of clout in the college football world. He ousted Bobby Petrino, lured Bret Bielema away from Wisconsin and serves as a committee member for the College Football Playoff.

It could be worse for the Razorbacks. Billy Ray could have donned a Hog Head in own of his stoic selfies. This is not up for debate.