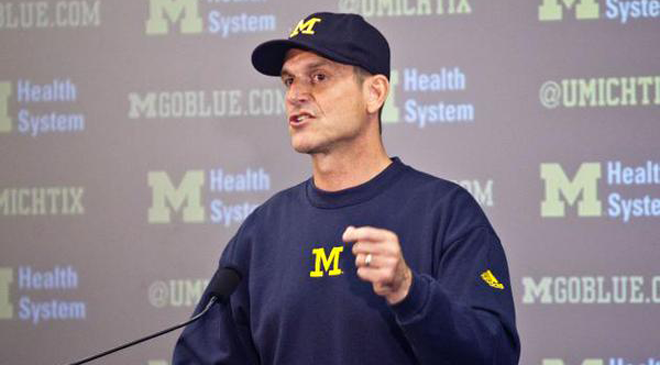 Have you heard that former University of San Diego head coach Jim Harbaugh is back in the college ranks? Apparently, Harbaugh spent a few years on sabbatical in a job that required he work on Sundays, but he’s returned to save college football. Specifically, he’s saving his alma mater, Michigan.

Apparently, this is a big deal. Harbaugh’s homecoming in Ann Arbor is such a big deal that Fox is aping one of ESPN’s better ideas of recent years with a multi-camera broadcast — and one camera will be fixed exclusively on Harbaugh.

So sayeth Sports Business Journal reporter Eric Fisher, who reports the Harbaugh-exclusive telecast is to be dubbed “Khaki Cam.”

Fox Sports Go to have 5 separate feeds for its CFB opener, Michigan vs Utah, including a "khaki cam" focused on Harbaugh entire game

If Fox wants a Harbaugh-centric telecast option that’s truly innovative, the network should just hire stand-up comedian (and an old college friend of mine) Dan Soder to provide in-game analysis AS Jim Harbaugh.

Harbaugh has managed to overshadow much of college football without coaching a game. His debut has certainly attracted plenty of interest, and many of the eyeballs tuning in to see him with the Wolverines will accidentally get a look at a pretty damn good Utah team.

Harbaugh’s celebrity status isn’t lost on the Utes. Heisman Trophy-contending running back Devontae Booker talked about the Harbaugh Effect some at last month’s Pac-12 media days. But, as Kyle Goon of the Salt Lake Tribune reports, Booker and Co. are tuning out the noise.

Devontae Booker says the celebrity factor of Jim Harbaugh is overhyped. "I don't care if it's Michael Jackson out there coaching."

Thursday won’t necessarily quell this odd fascination with Harbaugh. A win over a quality Utah team will only exacerbate the navel-gazing that’s been oh-so-prevalent already, while a loss promises to send some into a reactionary panic.