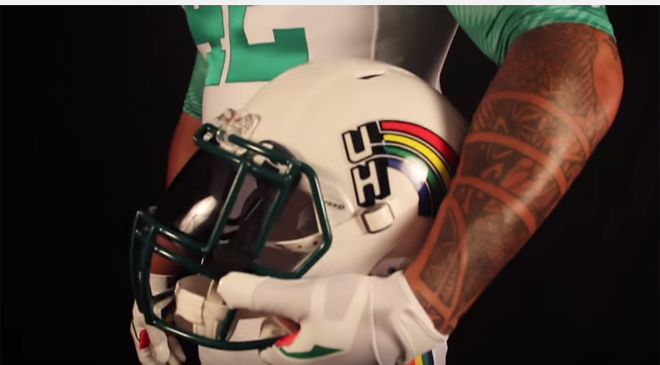 Hawaii’s first trip to the mainland this season pits the Rainbow Warriors against defending national champion Ohio State. Hawaii is a remarkable 41-point underdog against the Buckeyes, matching MEAC team North Carolina Central in its game against Duke and just two points better than Idaho against USC.

UH is likely in for a long afternoon in Columbus, but at least the new Hawaii uniforms ensure the Rainbow Warriors will look awesome in the process.

HawaiiAthletics.com released video and images of the Under Armour-produced, all-white retro uniform, which puts the rainbow back into Rainbow Warriors football. This is, without question, my favorite look in all college football.

Hawaii went to its current dark green with various accents of white, black and gray in the late 1990s. Tribal pattern fazed out the rainbow look, as the university athletic department deemphasized the name “Rainbow” Warriors.

Under Armour brought back the old-school Hawaii uniforms in 2013, the same season Rainbow returned to the nickname, for a Mountain West Conference game against San Diego State.

Below is the original look:

The standard Hawaii uniforms in recent years were…not good. Last year’s look had a strange swoop along the pants that didn’t quite match the jersey. Frankly, they looked like the last available pair of board shorts at the ABC Store.

Hawaii’s new full-time garb is a vast improvement, but the rainbow look to be worn against Ohio State is far-and-away the best.

If you look good, you play good — or at least, so goes the old adage. Should that hold true, Hawaii is pulling off the upset of the century Saturday.