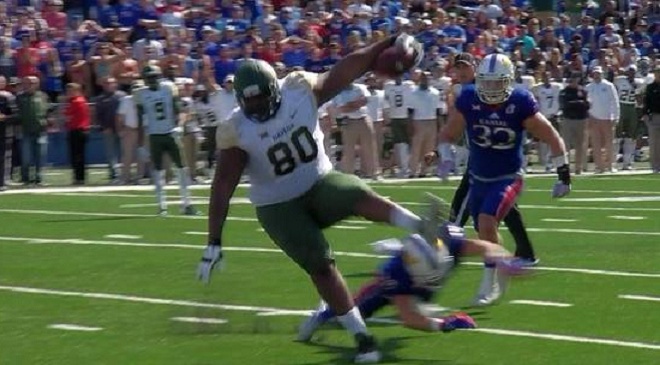 Through one half in Lawrence, Baylor is paying homage to Georgia Tech-Cumberland College on the game’s 99th anniversary. A big part of the deluge is LaQuan McGowan.

At around 400 pounds, LaQuan McGowan is big in the most literal sense. But his presence on the offense as a pass-catcher is also big in that other sense; that manner to which Lil Wayne refers in the intro of “Mr. Carter.” Big like colossal.

Behold the football equivalent of Vader hitting a moonsault off the top rope.

Granted the Kansas defense is ill-equipped to put up much resistance against any component of the Baylor offense, but seeing LaQuan McGowan rumble through the Jayhawks on the way to the end zone begs the question: Has Art Briles introduced the next evolutionary step in college football offense? How does a defense stop such a weapon without surrendering serious YAC?

Condolences to Michael Glatczak, the Kansas safety who was asked to tackle LaQuan McGowan.

To be fair, the concept isn’t Briles’ property exclusive.

An offensive revolution of super-sized create-a-players may indeed be afoot.