Scooby Wright Exits As One of Arizona’s All-Time Best 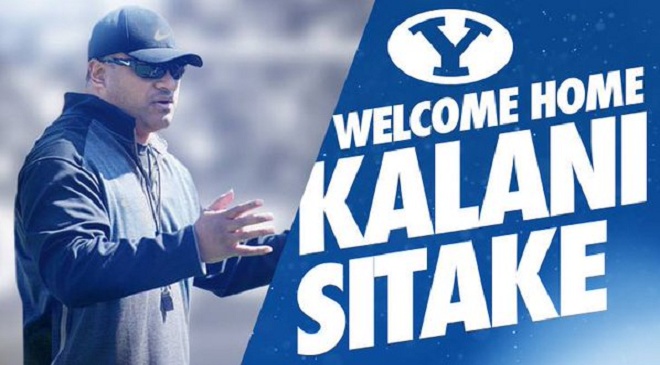 The timing had a certain quality reminiscent of Alex Rodriguez’s announced contract extension with the New York Yankees while the rival Boston Red Sox were clinching their 2007 World Series. It was a little tweak of a bitter foe, compounded by Sitake’s connection to the Utah coaching staff. He’d been defensive coordinator there before going to Oregon State for the 2015 season.

Despite the coup of a former assistant, and a 28-point streak that nearly erased an initial, 35-0 deficit, BYU fell short of Utah where it mattered most Saturday — just as it has every meeting since Utah’s intention to join the Pac-12 and BYU’s to go independent were announced.

BYU’s consecutive loss in the Holy War crystallizes Kalani Sitake’s most pressing mission in his new role as Cougars head coach. He must get BYU over the hump against Power Five competition on a consistent basis in order to break the glass ceiling that separates the Cougars from college football’s elite.

When BYU went independent in 2011, the football program made a heavy bet on itself. Going out on an island all its own meant BYU needed to win big enough to either gain Power Five distinction a la Notre Dame, or pique interest from one of the sport’s power-broker league enough to garner an invite.

So far, and much like Saturday, BYU’s been close but not close enough.

The Las Vegas Bowl loss was BYU’s fourth of the season. Not coincidentally, all four came against Power Five competition: UCLA, Michigan, Missouri and Utah.

BYU supporters are apt to remind you that independence is not equivalent to Group of Five membership. But a 1-4 record against the Playoff priority leagues, and a Hail Mary away from a goose-egg, stands as a reminder the Cougars’ version of independence isn’t the same as Power Five designation.

BYU hasn’t been quite so futile against the Power Five every year since going independent. Last season, it beat the ACC’s Virginia, Big 12’s Texas and Pac-12’s Cal. But, for the Cougars’ last win over a Power Five team that finished over .500, one must go back go Oct. 12, 2013, when they beat Georgia Tech.

Thus far into its independence, BYU has shown it can be a solid, middle-of-the-road Power Five team. It has yet to show it can be a Top 25 caliber Power Five like rival Utah, or a conference championship-quality Power Five like TCU, both of which exited the Mountain West around the same time as BYU.

On one hand, BYU hasn’t had the prominent stages Utah and TCU used to launch their Power Five candidacies — Rose and Sugar Bowls. On the other, BYU’s move to independence removed it from contention for a New Year’s Six bowl-game bid.

The Cougars dominated their Group of Five competition this season, including 2014 Fiesta Bowl winner and G5 darling Boise State. Last season, BYU beat this year’s G5 New Year’s Six representative, Houston — a much different Houston team, mind you, but the point stands. BYU is in company with the Group of Five’s best on the field, and its lack of conference affiliation lets its schedule up from the typical Group of Five.

However, it’s not so much as to put BYU markedly ahead of the Group of Five — if at all.

To wit, BYU’s courting of Ken Niumatalolo — whose Navy team went into Thanksgiving weekend in contention for the New Year’s Six bid — played out disastrously in the public arena.

Of those six, all are bowl participants this postseason. One, Michigan State, is a College Football Playoff participant.

Kalani Sitake has an immediate opportunity to make a splash and get BYU on the right side of the velvet rope. Continued near-misses against the Power Five won’t get BYU where it wants to be, however.