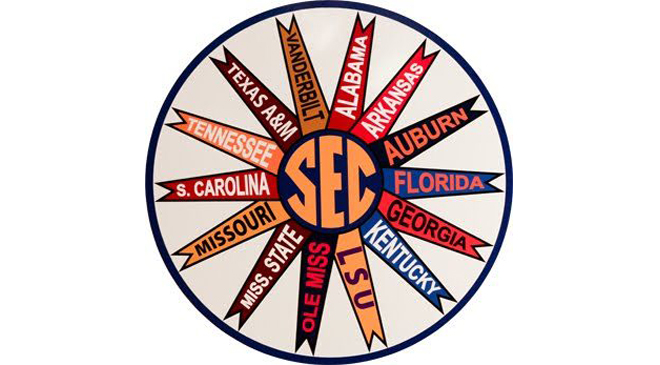 Outspoken Bret Bielema isn’t afraid to share his opinions, no matter how factually flawed his stance might be. The Arkansas head coach’s latest target, when asked at Tuesday’s media session of the SEC meetings in Destin, Florida, was a 9-game SEC schedule.

Bielema on folks pushing for nine conference games: “I invite you to play eight in the SEC”

Since joining the SEC after a wildly successful tenure at Wisconsin, Bielema has been one of the conference’s most vocal boasters. Whether his attitude can be attributed to compensatory bravado that dismisses Arkansas going 2-14 in SEC play since 2013, or is just Bret being BERT, his latest position can be summarily dismissed right along with his care-lording on uptempo offenses.

Or, at least, it could be, if Bielema wasn’t the conference’s only representative publicly coming out against a 9-game schedule.

LSU athletic director Joe Alleva appeared on The Paul Finebaum Show last week and expressed similar concerns. Alleva went more in depth with his assessment that the mighty SEC was simply too powerful to play nine conference games. A 9-game SEC schedule would doom the league’s College Football Playoff chances because, by golly, everyone is just so good and can beat one another on any given week.

Since Bret Bielema addressed the topic when asked, I think a fitting, one-word rebuttal is hogwash. The notion the SEC should not implement a nine-game schedule, when the majority of Power Five conferences will have instituted such a system by 2016, is utter hogwash.

Scheduling uniformity among the game’s power brokers is the most fair way of determining the College Football Playoff field. And while not all conferences are created equal, the SEC taking uniformity hostage because of its own collective arrogance is…well, you get the idea.

The SEC has effectively manipulated college football’s championship landscape since undefeated Auburn was frozen out of the BCS Championship Game in the 2004 season. Since then, solidarity in declaring the league vastly superior to the rest of the nation has bent the rules in the conference’s favor.

Consider Alabama, which got a rematch with LSU in the 2012 BCS Championship Game as a reward for its schedule. Never mind Oklahoma State beat twice as many teams ranked at season’s end, the invented perception was that Alabama played the tougher schedule because SEC.

Let’s also ignore that the Pac-12 finished each of the last two seasons with half of its members ranked, the same percentage as the SEC finished ranked in 2013 and 2014. The Pac-12 did so with a 9-game slate — and the 9-game schedule did not preclude Oregon from reaching the inaugural College Football Playoff or playing into the national title game.

And as for the argument that a 9-game SEC schedule means the league would have to avoid marquee nonconference games, bear in mind that Oregon played New Year’s Six participant Michigan State in the early-season frame.

The SEC is a great conference, and none of the preceding is intended to take away from its strength. Sending seven teams from a single division to the postseason is a noteworthy accomplishment. Nick Saban restored Alabama to its status as a super-power, in the process carving his name into college football lore. LSU takes on strong nonconference opponents almost every play, playing Oregon in 2011 and Wisconsin last season.

But the myth that the SEC has managed to insulate itself in, at the detriment of an even playing field for the rest of college football, is crumbling. A 2-5 postseason record for the SEC West exhibited cracks in the facade last season.

As Tony Gerdman of The-Ozone.net notes, the immediate success of Missouri — long a Big 12 bridesmaid — directly dispels Bielema’s assertion about the rest of the nation facing an 8-game SEC schedule. The Tigers have played in as many SEC Championship Games since joining the league in 2012 than they reached in the entirety of their Big 12 membership, from 1996 through 2010 (the last year of the Big 12 CG).

Establishing some form of even practices is essential to perfecting the Playoff. Letting SEC arrogance stand in the way of that is not an option.