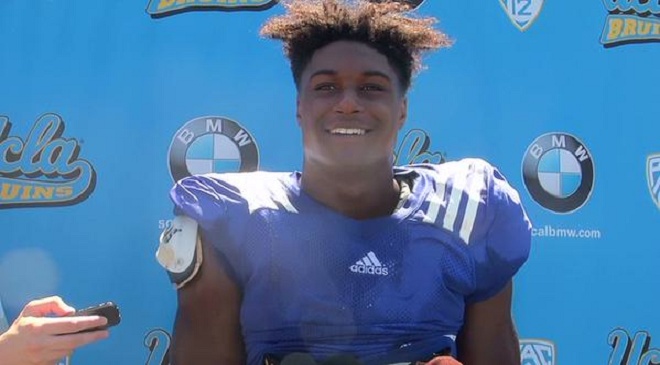 It’s oh-so fitting, albeit indescribably unfortunate, that the last time we may see UCLA linebacker and running back Myles Jack in Bruin blue-and-gold, he made a game-winning play.

UCLA head coach Jim Mora told reporters Wednesday Myles Jack is out for the season with a knee injury. Jack is eligible for next spring’s NFL draft, and I personally would be surprised if he didn’t pursue his dream — especially in light of today’s development.

UCLA LB Myles Jack is out for the season with a knee injury. Just devastating.

I could easily talk myself in the other direction, though. Being on the beat of the UCLA football team in 2014, it didn’t take long for me to see the kind of teammate Myles Jack is. He’s college football’s do-everything poster child because he was truly willing to do-everything to help the Bruins win.

To that end, maybe Jack would entertain a fourth season in Westwood to pursue that elusive Pac-12 championship. But if he didn’t, the decision would be far from selfish. Selfish is the last word to describe Myles Jack.

Linebacker is his favorite position, and he readily admitted he enjoyed focusing on defense. Linebacker is also his best position, though that’s not by default. He’s excelled on special teams and of course, in his move to running back during the second half of the 2013 season.

Myles Jack winning Pac-12 Freshman of the Year for defense and offense is one of those milestones that college football conversationalists will mention with awe 10, 20, 30 years from now. I was in the house at Arizona Stadium when Jack first debuted as a ball-carrier November 2013, and it was truly one of the most remarkable football feats I’ve had the privilege of witnessing live.

UCLA returns to Arizona Stadium this Saturday with College Gameday in tow and early positioning in the heated Pac-12 South at stake. The cruelty of injury is on full display this weekend in the Sonoran Desert, with Myles Jack joining fellow Bruin stars Fabian Moreau and Eddie Vanderdoes on the sideline. The Wildcats could be without All-American Scooby Wright, chief among a number of linebackers Arizona’s had to make due without three games into the season.

Injury is an often unavoidable price of football, as I have written on this site many times. But when college players are around for just four years — three, in the case of the truly special, as Myles Jack is — that lost time is truly magnified.

Yes, it’s sad that the below play might be Myles Jack’s last as a Bruin, yet poetic at the same time.