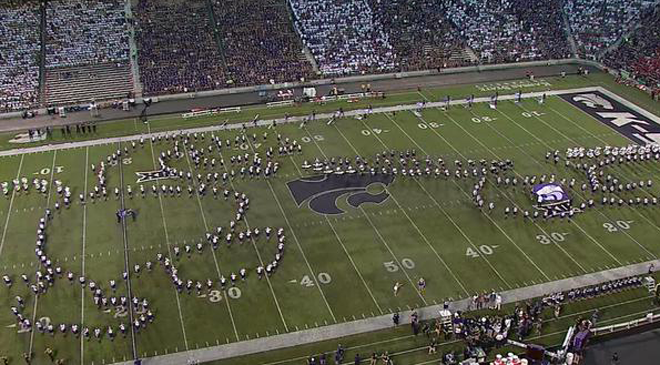 The Little Mermaid is the first thing that comes to my mind amid the Kansas State band director’s suspension, as announced Tuesday by the university.

Some time in the ’90s, I can still vividly remember seeing a local TV news piece, spotlighting some morality organization, that had Disney in its sights over The Little Mermaid‘s VHS box cover. The report tiptoed around the word, but I got the gist: This organization was incensed over an apparently phallic tower hidden within Neptune’s palace.

Because anything involving body parts is the pinnacle of comedy for school-aged boys, I immediately had to see it for myself. A few things stuck with me:

1. I mean, I guess? I can see where someone might say so, but to me, it looked more like a melting candle. It still does.

2. How did someone first spot this? Seemed to me like someone would have to be looking for a penis to find a penis.

Regardless, Disney acquiesced to the outrage and discontinued this cover art. The Kansas State band director’s suspension is K-State’s Little Mermaid cover, though the university is motivated more by content farms echoing the same, embarrassing headline than by a self-appointed morality policing group. The sentiment is the same, though.

Not only is the band director suspended, but K-State is paying a $5,000 fine. $5,000! The fine is less for urinating in public in some areas, which involves exposing an ACTUAL…well, you know.

And what exactly will that $5,000 fund? Therapy for the delicate sensibilities of those exposed to a four-second formation that maybe-looked-like-a-penis-if-you-wanted-it-to? Maybe if the Big 12 distributed that $5,000 among the members of the Kansas State football team, they could use the few extra bucks to see a movie this week.

Then again, they might see something R-rated. Wouldn’t want that.

Kansas State’s original response was perfect, putting the onus for any phallus-viewing squarely on the viewer. The release of the schematics for a Starship Enterprise formation should have been checkmate, the proverbial finger-wag for others to get their minds out of the gutter.

And who know the Starship Enterprise more intimately than Captain Kirk?

I think it's time for the @Big12Conference leaders to step down and get their eyes checked. What a travesty! https://t.co/VDkOOA5dUl

When I first saw the formation in a video clip — not in a freeze-frame — I didn’t see the Starship Enterprise. I also didn’t see a penis. It looked like a Civil War era cannon aimed squarely at the Jayhawk. Much like The Little Mermaid, I’d have never seen anything else without a thorough examination, or having it pointed out to me.

Maybe it’s for the best around the same time folks were morally outraged by The Little Mermaid, I couldn’t ever see the images within the popular Magic Eye posters. I was probably missing out on a lot of body parts.