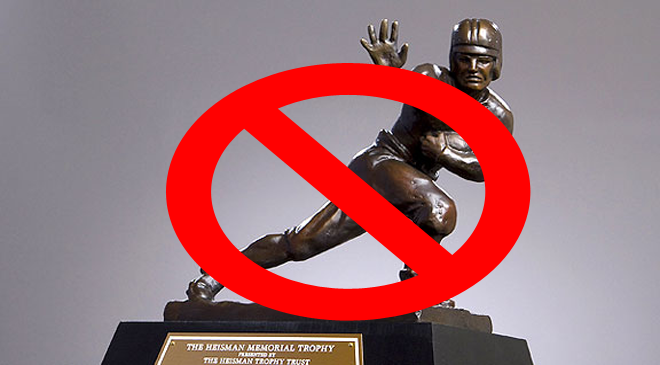 I’m limiting this rundown to Heisman votes in my lifetime, and Tim Brown’s 1987 win is cutting it a little close. Going back another three decades is really breaking my own rule, but it ties together.

Forgive any Syracuse alum who hates Notre Dame. Twice, controversial Heisman selections from the Golden Dome trumped worthy candidates from the home of the Carrier Dome.

The more recent is Tim Brown’s 1987 selection ahead of Don McPherson. Brown’s nomination is steeped in controversy nearly three decades later — not because he was the first wide receiver to receive the Heisman, but because the Notre Dame product’s resume wasn’t necessarily eye-popping. He finished 1987 with 39 receptions for 846 yards, rushed 34 times for 144 yards with one touchdown and ran back three punt returns for touchdowns.

The three punt returns make the most compelling argument in Brown’s favor, though Syracuse quarterback McPherson had a pretty strong case of his own.

“Syracuse can do everything,” Joe Paterno said via Syracuse.com. “As long as it keeps Don McPherson healthy.”

He did, and they did. Syracuse went unbeaten, 11-0-1, behind McPherson’s 22 passing and five rushing touchdowns.

McPherson was the second big-time Orange star to take a backseat in Heisman voting to a controversial Notre Dame selection. In 1956, Jim Brown finished fifth among voters who selected Paul Hornung as the award’s recipient.

Brown rushed for as many touchdowns, 13, as Hornung threw interceptions. Brown’s 13 scores and 986 yards dwarfed the statistics other running backs in contention for the Heisman produced, and he would have been the Trophy’s first black recipient. Syracuse successor Ernie Davis staked claim to that honor in 1961.