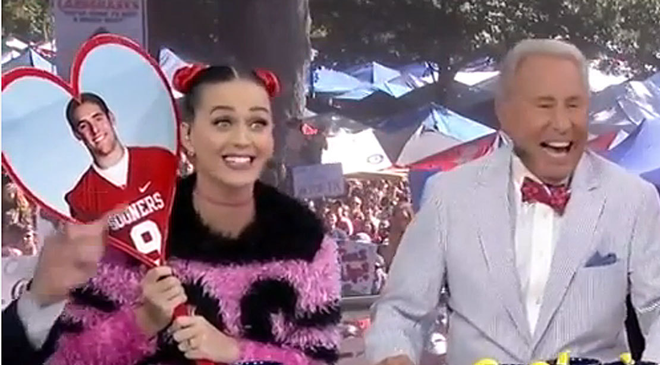 Folks with no skins in the game have different schools of thought on naming a starting quarterback in the spring. One thought asks why end competition almost a half-year before Week 1, while the other sees it as a move to start readying for the season. Count me in the latter group.

A springtime decision also serves as a vote of confidence. As David Ubben lays out in this Sports On Earth feature, confidence from his coaches may be exactly what Knight needs after transferring in from Oklahoma.

Confidence may not seem to be lacking for a guy who Katy Perry expressed her adoration for on College Gameday.

When it’s not one celebrity, it’s another, as gossip sites buzzed this week over an innocuous photo of Knight with Duck Dynasty star Sadie Robertson at a Justin Bieber concert.

"Is it too late now to say sorry" ….to all the people who had to witness a 22 year old man dancing at a Justin Bieber concert? Had a blast with @legitsadierob anyways! #biebs

So, yeah, Trevor Knight has ample reason to be confident. He has the same kind of rock-star quality about him Johnny Manziel exuded in his Heisman Trophy, when both Texas A&M and Kevin Sumlin barreled to the forefront of the national landscape.

Knight suffered through a slump of different kind. After running circles around Alabama in the 2014 Sugar Bowl, he didn’t jet around to sporting events, sleep through camps or come under NCAA investigation. Knight took the quicker and much more unfortunate route to football oblivion: he struggled to perform.

His 56.6 completion rating and 12 interceptions against just 14 touchdowns may have been as much endemic of Oklahoma’s stilted play-calling as anything to do with Trevor Knight. Nevertheless, Texas Tech transfer Baker Mayfield got the keys to Lincoln Riley’s high-octane offense in 2015, leaving Knight to spot-duty.

A partnership with Sumlin promises Knight the opportunity to play in a wide-open offensive set. New Aggies offensive coordinator Noel Mazzone’s scheme is friendly to running quarterbacks, evidenced in Brett Hundley’s performance under Mazzone at UCLA.

The fit’s natural, so why delay the inevitable?

Sumlin’s mired in mediocrity since Manziel’s departure, due in large part to instability at quarterback. Competitions before the 2014 and 2015 seasons lingered into fall camp, with the Week 1 starter in both cases — Kenny Hill and Kyle Allen — transferring following that same season.

Sumlin tried one way, extending competition to August (and beyond). Altering the plan and investing in a starter from the spring might be the kind of shake-up A&M needs to again compete in the SEC West.