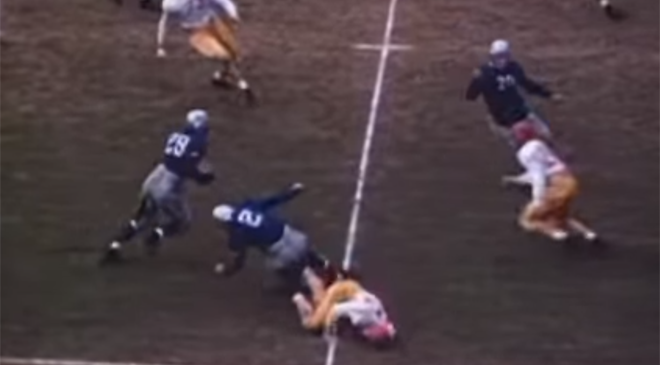 Jackie Robinson blazed a trail not only in sports, but for all of American society when he took his first at-bat with the Brooklyn Dodgers 69 years ago.

Robinson ranks among the greatest baseball players of all-time, but his exploits as a member of four different teams at UCLA are still celebrated today. He played some professional basketball before joining the Dodgers, and he was just as revolutionary on the hardwood as the diamond.

“The first player who I ever saw dunking as part of his game was Jackie Robinson,” John Isaacs of the barnstorming Harlem Rens said, via BlackFives.org.

Jackie Robinson excelled regardless his athletic endeavor, as evidenced in the below clip of his football-playing days at UCLA.

In the 1939 USC-UCLA rivalry game — the most well-attended in series history at 103,303 — Robinson showed off some dazzling moves.

Jackie hit the Juke Button long before there were any buttons to push.

Baseball held a much larger place in American culture than football throughout the 20th century’s first half. Jackie Robinson made such a profound societal impact in part because of his reach — and being the best player in his sport certainly helped.

Perhaps his historical prominence wouldn’t be the same had Robinson pursued football alongside his teammates. Nevertheless, that three members of the same college football team played such important parts in ending segregation in sports deserves more recognition.

In much the same way baseball recognizes Jackie Robinson Day, perhaps football could observe a day for Washington, Strode, Marion Motley and Bill Willis. This coming season marks the 70th anniversary of their collective ending to pro football’s self-imposed segregation.