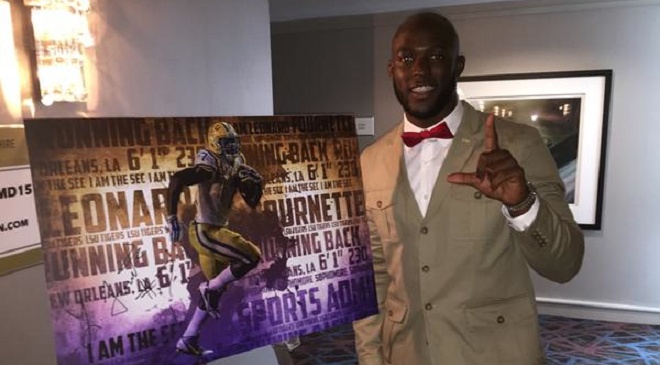 For LSU running back Leonard Fournette, evading SEC defenders is easy after the horrors he endured as one of the thousands of children displaced by Hurricane Katrina.

Ron Higgins of The Times-Picayune explains why the “pressure” of being one of the top running backs in the nation is, really, no pressure at all:

Pressure is little Leonard at 10 years old and living with his family on the Interstate 10 bridge at Claiborne after Hurricane Katrina washed away their Slidell home after it made landfall Aug. 29, 2005.

Hurricane Katrina devastated the Gulf Coast nearly a decade ago, and it’s impact long ago stopped being front-page — or viral — news. Leonard Fournette’s emergence as a success from the Katrina nightmare returns focus to a region still rebuilding. Wednesday’s USA Today addresses the gaps in government ability to respond quickly should another disaster the scale of Katrina strike.

Leonard Fournette’s prowess on the football field bringing attention to these issues is more of an impact than the sophomore running back could ever possibly have in the SEC — and he’ll have a huge impact.

Fournette is at the forefront of a stellar running back class, but he told reporters at Thursday’s SEC media days session that he’s not the cream of the crop. That distinction, according to Fournette, belongs to Georgia’s Nick Chubb.

Nick Saban and the College Football Circle of Life

The early stages of a relation are fun and exciting. Neither side can wait to see the other, often putting their partner on a pedestal.

But, eventually, monotony sets in. After a few years, maintaining a relationship takes work not everyone is cut out for. Sometimes, the seven-year itch needs to be scratched.

Nick Saban didn’t bail on Alabama after Year 7, but as Allen Kenney notes for The Student Section, that’s when his grumbling gained in volume. Saban’s seventh year as the Crimson Tide’s head coach ended with a surprising Sugar Bowl loss to Oklahoma, which the head coach dismissed as players lacking motivation.

At this week’s SEC media days, Saban gained attention for his comments on NFL draft grades potentially impacting “chemistry” and causing players to “run out-of-bounds” in the semifinal loss to Ohio State.

Kenney’s examination of Saban’s recent consternation, in context of his career arc, is illuminating. Alabama may be past the honeymoon phase.

For AthlonSports.com, I spotlight offensive and defensive breakout players for each Pac-12 team in the coming season. Without spoilering too much, a few names to know diving in include USC wide receiver Steven Mitchell, a burner ready to operate as Cody Kessler’s deep-ball threat, and UCLA defensive end Takkarist McKinley.

Mark Ennis breaks down how Pass fits into the direction of Louisville football under Bobby Petrino, particularly in the long-term. The youngster enters a situation wherein he’ll have the opportunity to learn the ropes alongside veteran quarterbacks — even if he’s got the foundational skills to contribute early.

One of the major question marks for Louisville moving into a Power Five conference was how it would recruit against programs established in the talent-rich areas in the Big Ten and SEC footprints surrounding the Cardinals. Pass passing on Alabama and Auburn is a resounding response.

Dismissed Utah defensive back Dominique Hatfield will not be charged for an arrest last month on suspicion of aggravated robbery. In the state of Utah, aggravated robbery is a serious felony with a minimum 5-year sentence, so Thursday’s news is huge for Hatfield’s life.

As for his football career, that remains unclear.

Potentially big news, but it may not change Hatfield's status with the team. https://t.co/YnRoTsLWkG