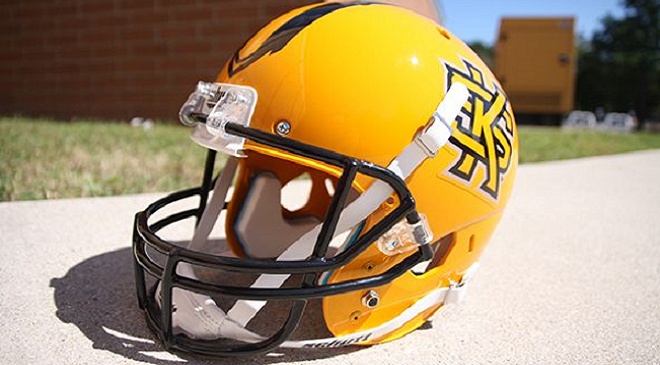 The first bit of college football history made in this 2015 season comes courtesy of quarterback Trey White.

Div. III Ursinus and Div. II Millersville played to a scoreless tie in regulation and needed five overtimes to declare a winner. It didn’t quite make college football history, as White’s touchdown for Kennesaw State, but it came close.

Ursinus defeats Millersville 17-9 in five overtimes. One short of the D-III record for OTs in a game. #d3fb

D3Football.com has details, including the brutal 6-of-40 the two teams combined to go on third downs. That almost makes the stats from Utah State’s 12-9 win over Southern Utah look Herculean in comparison. Almost.

USU and SUU are now a combined 0-for-21 on third down.

Hmm…perhaps not. They recovered to finish a combined 2-of-33.

Utah State scored its only touchdown at an opportune time, with Andrew Rodriguez running back a punt 88 yards in the fourth quarter. Rodriguez resoundingly answered how the Aggies would replace dismissed Jo Jo Natson on special teams. But now, Matt Wells has serious questions about his offense.

All 12 of the Aggies’ points came from either special teams or defense. Utah State has company, however. Eastern Illinois managed just five points — a field goal and a safety — in a 33-5 loss to Western Illinois.

If Western Illinois is on the upswing to compete with ISU and NDSU, as well as likely Playoff contenders Indiana State, Youngstown State, Northern Iowa and South Dakota State, the MVFC is going to be an absolute gauntlet.

A Banner Start for Conference USA

Vanderbilt-Western Kentucky and FIU-UCF added to Thursday’s defensive motif. Those two contests also signaled a nice start to the 2015 season for Conference USA.

Make that two big wins for @CUSAFB today … Strong start to the season for the league.

Since winning eight games in 2011, wins have come sparingly for FIU. The Panthers typically only garner headlines when athletic director Pete Garcia does some questionable, so the catharsis of knocking off a successful, in-state counterpart is understandable.

While FIU needed to rally, Western Kentucky needed to hold off a Vanderbilt on a would-be overtime-forcing two-point conversion. Fitting the Hilltoppers’ season opened in such fashion, given they closed 2014 with a thwarted two-point attempt against Central Michigan in the Bahamas Bowl.

Though, if we’re being perfectly honest, Western Kentucky’s win was somewhat disappointing. The explosive Hilltopper offense was shutout in the first half, with the underdog Commodores controlling the tempo all night.

The more impressive effort from Conference USA may well have come in the sole loss. UTSA fought defending Pac-12 South champion and No. 22-ranked Arizona deep in the fourth quarter of a 42-32 loss.

The Roadrunners went for an astounding 525 yards of total offense, outgaining Arizona by 129.

UTSA started 2014 impressively, routing Houston before taking this same Arizona bunch to a 23-20 decision. The Roadrunners fell apart over the course of the campaign, but it’s a new year with an almost entirely new roster. Larry Coker might have the dark-horse contender in C-USA West this fall he was expected to last.