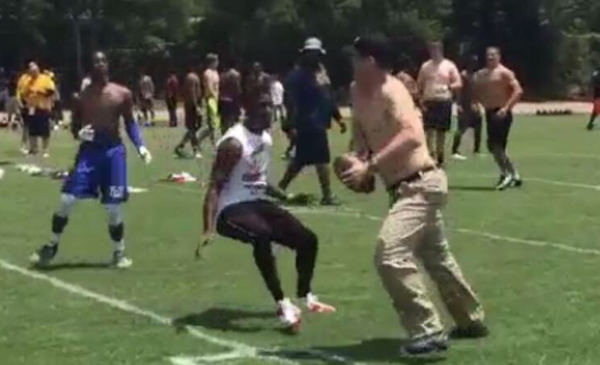 Perhaps they never had it, as the sausage-making process in college football is ugly even for those programs who try to avoid being heartless.

One of Richt’s endearing qualities as a man (not a coach) was how he viewed transfers, specifically those who wanted to transfer out of Georgia.

Back in 2012, Richt explained why he was an outlier in how most coaches handle transfers.

“I want every young man to have a successful time in his four- or five-year window to be able to go to college. So I don’t want to impede a guy from realizing his goals and his dreams, wherever it is,” Richt said. “I want our guys to stay, and sometimes when they do choose to leave, I still like the kid and I still want the kid to have success. If he thinks he will have success at a school you compete against, then so be it.”

This was a source of many-a-hot-take from Georgia fans who saw Zach Mettenberger and Nick Marshall leave Athens and return to square off against the Dawgs (never mind that both went JUCO first; Georgia fans angry at being “soft” didn’t care about the facts).

Richt’s outlook on what college should mean to the players was a breath of fresh air in a world full of jerks on parade, basking in the glow of their own hypocrisy.

When a coach bolts to another gig, he can take his entire staff with him. Heaven forbid players do likewise.

Imagine if Mike Gundy, or any other big-name, big-paycheck coach had to sit out a season’s worth of games?

This brings us back to Georgia, where Nick Saban disciple Kirby Smart is now running the show.

Smart is coming under fire for restrictions put on A.J. Turman, a running back seeking to leave Georgia. As Smart puts it:

“I wanted to set the precedent for the future that kids would not be able to go to Miami right away,” Smart said. “It’s very important that we understand that, and that’s pretty much standard operating procedure when a coach leaves one place, that a kid can’t go there with the coach. That’s important to me that people understand that.”

The hypocrisy of that statement blows me away. Sadly, Smart isn’t an exception that proves the rule; he is the rule. And that’s the problem, at least for Georgia fans who cared about the player, not just the institution.

If you want players to transfer at will, fine. Push for uniformed transfer rules.

To say Kirby Smart is out of line is simply wrong.
— Barrett Sallee (@BarrettSallee) March 23, 2016

Yes, the win-at-all-costs mentality that Saban seemed to employ was never present in Athens, and should Smart quickly come in and bring a national title (or SEC title) to Georgia fans, the ends-justifying-the-means mentality will win the day.

That would be unfortunate, though.

A player who doesn’t want to be at a certain institution does nobody any good. The player isn’t happy, the coaches don’t get a productive player, which results in a wasted spot on the roster. It doesn’t even make sense from a pragmatic perspective.

Perhaps I’m naive, but a coach can win big doing things with a morality dictate not just by the scoreboard. Winning titles and letting players be where they want to be don’t have to be mutually exclusive. A coach can win and still sleep well at night.

Richt had 15 years to prove he could win big while doing things his way and he ultimately failed to do so. The last decade of Richt’s run wasn’t good enough to meet lofty standards, but I’ll always have a romantic notion of what Richt stood for as a man. It’s a shame that no longer holds much weight in Athens.

The Alabama-ization of the Georgia football program is in full swing, and it doesn’t seem to be stopping anytime soon.