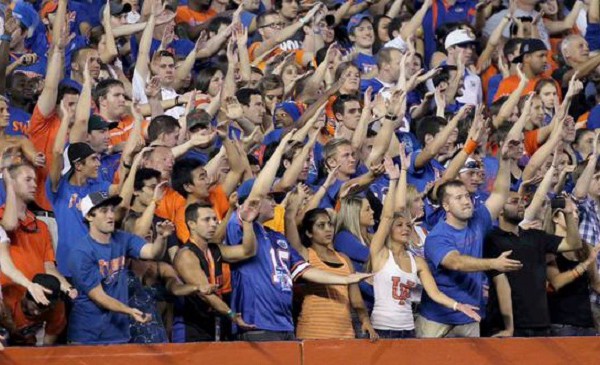 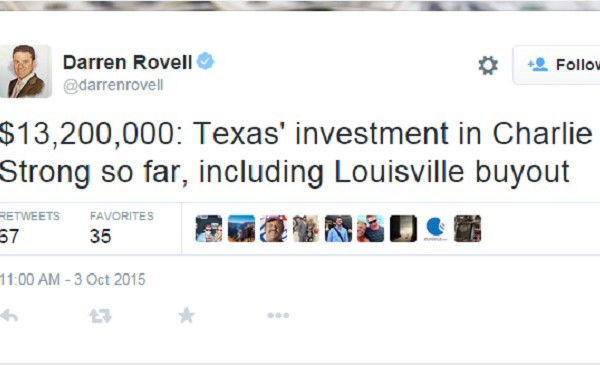 It’s only halftime of Charlie Strong’s 18th game as Texas head coach, but the grim reaper of job-security is already swinging his Twitter scythe.

I speak, of course, of Darren Rovell.

$13,200,000: Texas' investment in Charlie Strong so far, including Louisville buyout

Texas badly needed either the Oklahoma State win last week, or the Cal game two weeks ago to keep the buzzards from circling. No matter what happened before Saturday, the Longhorns were going to be trekking through the proverbial desert against TCU.

And, indeed, a 37-0 halftime margin is just about the worst-case scenario for Texas’ inevitable loss to TCU. Had Charlie Strong come into Fort Worth with a two or even three-win buffer, we’re perhaps spared reminders of his buyout and Texas’ investment into his contract.

Another number beyond $13.2 million to consider is four, as in TCU is the fourth currently ranked team Charlie Strong’s still-rebuilding Longhorns have faced already this season.

The Horned Frogs sport the highest at No. 4, though Notre Dame isn’t far behind at No. 6. The first half of today’s TCU contest proves emphatically what we already knew about Texas in Week 1: It’s not a Top 10-caliber team.

But losing to No. 20 Oklahoma State and No. 24 Cal by a combined four points suggests the Longhorns may not be that far off from the outskirts of the Top 25, outlandish as it may seem.

The immediate road doesn’t get any easier, as Texas takes this inevitable L into Dallas next week for the Red River Shootout. Oklahoma is currently battling No. 23 West Virginia in Norman, and the Sooners are likely to beat the Longhorns next week.

A bye follows, at either the absolute best or absolute worst time, depending on perspective. The Horns get time to regroup from a likely 1-5 start before hosting K-State, the start of a far more manageable back-half to the offseason.

Conversely, midseason firings often occur ahead of bye weeks: Mike Stoops in 2011 and Lane Kiffin in 2013 are two prominent examples.

Typing the above sentence feels wildly outlandish to me. Charlie Strong is 18 games into his tenure — 18! — and inherited a mess. Texas also has an interim athletic director, Mike Perrin, on the job all of three weeks for the fired Steve Patterson.

Surely a coach with one-and-a-half seasons to his credit and an interim presiding over the athletic department will be afforded time.

I would certainly hope so; but then, when the grim reaper of corpo-news looms, the buzzards are often not far behind.