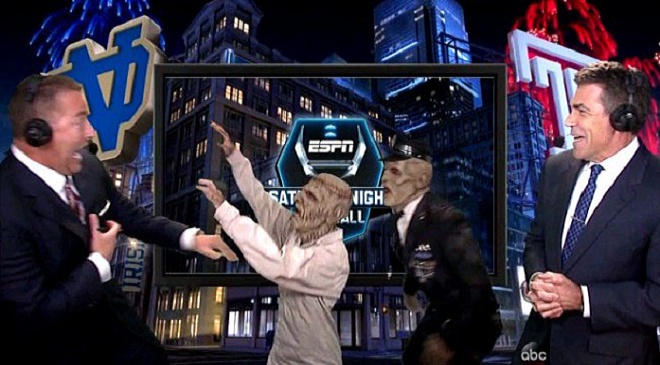 I love this sport. It never ceases to amaze me how just about every Saturday in the fall, I’m left incredulous by at least one moment, game or performance.

So much of the residual activity surrounding college football is exhausting. Some NCAA regulations are archaic, the modern concept of amateurism evolves at a glacial pace while coaching salaries climb exponentially and TV execs constantly meddle with the game’s essence.

And yet, through it all, the game itself perseveres. College football in its purest form never fails to elicit genuine emotion and unifies people from different walks of life.

What else could prompt message-board quality rants from Rob Lowe?

I like Cuttcliffe, but this is some mealy mouthed, rambling, weak cheese. His guys got hosed!Where's the outrage?! https://t.co/Hq6EVPI4S0

The officiating was a fishy embarrassment. The Conference must act to remain at all credible. Duke https://t.co/mf6GVwA3oT

Welcome to Four Downs for Week 9.

Oregon’s 61-55 defeat of Arizona State in three overtimes Thursday set a fitting tone for the weekend. Vernon Adams balled out in fashion reminiscent of his outstanding three years at Eastern Washington, when he made the incredible look routine.

Wow… Oregon scores a TD on 4th down with 12 seconds on the clock to tie the game vs Arizona State! #SCtop10 https://t.co/3MtuPdxFFl

Adams’ remarkable performance might well have been comprised in the third overtime, the first extra frame in which teams are required to attempt two-point conversions. Whether the call came from head coach Mark Helfrich or offensive coordinator Scott Frost, someone on the Oregon staff called a bizarre formation wherein wide receiver Bralon Addison lined up behind center and Adams was sent out wide.

Addison fumbled the snap, turning the conversion attempt into a veritable non-play. Had Arizona State scored and converted its own two-point attempt, that call would have drawn intense scrutiny.

Instead, Arizona State reached the shadow of the goal line with the opportunity to tie and offensive coordinator Mike Norvell called a couple of pass plays. Sun Devil quarterback Mike Bercovici had a monster night, passing for 398 yards and four touchdowns, and rushing for a fifth.

It stands to reason Norvell would put the game in his quarterback’s hands. But consider the Sun Devils rushed for 344 yards. After Bercovici’s initial throw at the end zone was nearly intercepted, eschewing the run a second time three yards from the end zone only for Arrion Springs to make the pick the Ducks missed on the previous play.

After Arizona State lost on an unusual set of play calls to kick-off the weekend, Colorado and Minnesota both suffered heartbreaking losses in somewhat similar manners.

Colorado had two possessions with which to take a potential game-winning lead over UCLA in the Rose Bowl. On both possessions, Colorado attacked primarily with the pass, abandoning a run game that had gone for 242 yards.

Quarterback Sefo Liufau sustained an arm injury that became readily apparent as he labored with his throws, and he was intercepted to end the game on the Buffs’ last-ditch effort. While Colorado was hindered in its play-calling options on the final possession, with just one timeout remaining, the shift away from the run in the previous possession was confounding.

Minnesota interim head coach Tracy Claeys showed chutzpah going for the game-winner in pursuit of the Little Brown Jug, rather than kick the field goal to force overtime. Had the Golden Gophers running a quarterback draw the goal line against Michigan succeeded, the decision would look like a stroke of genius.

Instead, Minnesota’s clock mismanagement throughout its final possession and stuffed attempt at a game-winner cast immediate doubt on Claeys’ candidacy for the head coaching position Jerry Kill vacated earlier this week.

Upheaval to the College Football Playoff was minimal, if nonexistent. Temple could have forced its way into the conversation had it completed the upset of Notre Dame.

As it stands, the Owls fell short in a valiant effort that boosts the Fighting Irish’s Playoff resume. Despite the loss, Temple laid the foundation to make its place in the national college football spotlight a regular occurrence.

College Gameday rolling into Philly, the Linc sold out and Temple standing toe-to-toe with a brand-name program and national championship contender: Why can’t this be the new normal? A vacuum exists for college football in the Northeast,

Temple’s American Athletic Conference brethren Memphis and Houston cruised past Tulane and Vanderbilt to remain perfect and keep the dream of a Group of Five participant in the Playoff alive.

Speaking of staying alive, call Kevin Hogan John Travolta because the Stanford quarterback’s strutting into the end zone kept the Cardinal in the hunt for a Playoff berth. A missed field-goal attempt on a night Washington State connected on five of them certainly helped Stanford’s prospects, but Hogan’s two touchdown rushes fueled a Cardinal rally after a first half sans trips to the end zone.

Returning to First Down and end-of-game management, Stanford’s hopes were preserved in part not necessarily by a play call, but much more understandable and excusable on-the-fly decision by one of the players on the field. Quarterback Luke Falk’s forced pass attempt near the line of scrimmage set up Stanford with favorable field position, which the Cardinal parlayed into the game-winning field goal.

The College Football Playoff landscape underwent little change. Its predecessor at the FCS level, however?

Week 9 Saturday started with Colgate jumping out to a big lead and holding off a late rally from Fordham, the Patriot League’s prohibitive favorite to win the conference championship and auto-bid into the FCS Playoffs.

Again returning to First Down on late-game management, Colgate surrendered two touchdowns in the final minute, yet still won.

What. A. Game. Fordham scores two TDs in final minute, but Colgate stops a 2-point conversion to tie with no time left. Raiders win 31-29.

No. 1-ranked Coastal Carolina won’t have to worry about receiving an at-large bid into the Playoffs, so long as the Chanticleers don’t completely disintegrate down the stretch. But Saturday’s loss to Big South Conference counterpart Charleston Southern makes hosting all the way through the semifinals more difficult.

But Charleston Southern’s sudden jump into pole position for the FCS Playoffs squeezes the bubble for other, at-large hopefuls.

THIRD DOWN: Can The Big 12 Lend the SEC Some Offense?

Oklahoma State and Texas Tech combined for 123 points, the highest score of this college football season.

Two Big 12 teams erupting for such staggering point production is no surprise; five of the nation’s top scoring teams hail from the Big 12. But the brand of football played in that conference stands in sharp contrast to the SEC to such a point, they almost don’t look like the same sport.

At the same time Texas Tech and Oklahoma State kicked off, Georgia and Florida opened the latest installment of the World’s Largest Outdoor Cocktail Party. The Cocktail Party featured not one quarterback performance that could be described as good, or even serviceable.

Meanwhile, each of J.W. Walsh, Mason Rudolph and Patrick Mahomes all shined in the Oklahoma State-Texas Tech contest.

Ardent SEC honks will dismiss the offensive ineptitude in Jacksonville as a byproduct of defensive prowess. There’s some truth to that, insomuch as Georgia has a talented defensive lineup and Florida’s one of the nation’s best on that side of the ball.

But I’m hard-pressed to believe in a scrimmage against tackling dummies, Treon Harris or Faton Bauta are going to put on the kind of performance the quarterbacks in Lubbock had. Likewise, Walsh, Rudolph and Mahomes are all talented playmakers, made to look better by porous defenses.

FOURTH DOWN: We’ll Win This Game We Know The Reason Why

Previously winless New Mexico State beat Idaho in overtime Saturday, 55-48, removing the Aggies from the ranks of the FBS 0-fors. With North Texas beating UTSA in Conference USA play Saturday as well, only two teams remain without wins on the season: UCF and Kansas.

While North Texas is just as much deserving a shout-out for its first win as New Mexico State, how the Aggies won only adds to the impact.

Idaho led 30-7 at one point in the second half, but the Aggies used a 27-point blitz in the fourth quarter to force overtime. After trailing 40-21 at one point, New Mexico State went on a remarkable 35-8 run.

However, despite the offensive deluge down the stretch, a noteworthy defensive play won it for the Aggies.

When the nation’s longest losing streak ends on an interception made between a player’s feet, one is reminded that college football is indeed awesome.