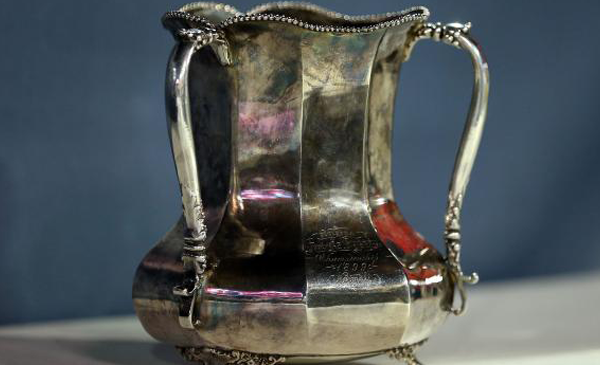 It’s rather ridiculous, the importance our society places on sports.

I felt helpless as reports of the horrific terrorist attacks carried out Friday in Paris began to surface. I still do.

I also couldn’t shake the feeling that spending Saturday watching and writing about college football as if it anything more than a frivolous endeavor comes off crass. I feel a twinge of guilt even in penning this column.

For those who feel powerless and want to do something, anything to help, the Red Cross is accepting donations.

The attacks on Paris put the world’s ugliest side center and front, but the truth is every Saturday spent immersed in the fun and frivolity of college football is amid tragedy and chaos.

Whether civil unrest in a far-off nation like the Democratic Republic of the Congo, or violence right here in the United States, we are never free from strife.

All we can do is make the world around us better in our own ways. If that means donating blood and plasma or handing out blankets to the homeless, we are not entirely powerless.

In the interim, let’s enjoy college football for what it is. The game’s meant to be fun. Cheer loudly, cheer passionately, but respect each other.

FIRST DOWN: Football Does Good

Programs around the nation honored Paris. Army and Arizona both took the field carrying the Tricolore.

Here's a shot of Cardale Jones' cleats on the field at Memorial Stadium. https://t.co/9MVgGk4OrG #ForParis pic.twitter.com/5xqZbwyIGr

The only sign we plan on sharing today. pic.twitter.com/2Es5newDcJ

All are symbolic gestures, sure. But the reach football has in our culture is such that such gestures can inspire action, reminding us that we can help as mentioned above.

Sometimes a team just taking the field can have immense impact, and Week 11 provided a reminder.

Saturday marked the 45th anniversary of the Marshall plane crash that killed 75 people connected to the Thundering Herd football program, including the coaching staff and much of the team.

Marshall honored the victims Saturday with the number 75 on every helmet, and family of members of the 1970 team gathered at midfield before the Herd’s Conference USA matchup with FIU.

SECOND DOWN: Pac-12 Played Out of the Playoff

With the Pac-12’s only Top 10 teams each sustaining their second loss, the conference is likely out of the Playoff picture. Sure, something wild could happen that reopens the conference’s window.

But barring the biggest college football cluster since the final weeks of the 2007 season, the national championship’s message for the Pac-12 is pretty clear:

It’s been 11 years since the conference last claimed a national title; 12 if asterisks actually carry weight for you. If split national titles aren’t your thing, then you have to go back all the way to 1972 for the last undisputed Pac-12 championship.

Of course, it was the Pac-8 in those days.

League brass trumpeted the conference’s success at media days in July, and deservedly so. While 2015 is hardly the banner year that 2014 was, this season isn’t an abject failure.

Certain teams underachieved for various reasons. Arizona and Oregon have dealt with critical injuries, and both USC and Arizona State had unexpected coaching shakeups.

Others overachieved, like Utah and Washington State. However, the Utes fell short in pivotal South division games against USC and Arizona.

Washington State’s win at UCLA Saturday gives it marquee victories over both Arizona schools and Oregon, and the Cougars were a possession away from beating Stanford and controlling the North. However, anything Washington State accomplishes comes with the blemish of losing to Portland State Week 1.

Plenty of chest-thumping around the Pac-12 was born of the conference’s overall strength, which was ultimately its undoing for the purpose of the Playoff.

THIRD DOWN: Texas As This Year’s Virginia Tech

Oklahoma went on the road in the marquee matchup of Week 11 and summarily dispatched previously unbeaten Baylor, 44-34.

Baylor’s loss moves the Big 12 ever closer to the tenuous position in which it concluded 2014, with multiple one-loss teams and no opportunity at 12 wins to appease the Playoff committee.

Oklahoma State remains as the conference’s sole unbeaten, though the Cowboys needed a raucous comeback (aided by a bad spot) at Iowa State to maintain their perfect record.

Here's the 2nd down spot Iowa State got before getting stuffed on 4th down: pic.twitter.com/WkTujcm6uA

Mike Gundy may have the Big 12’s sole unbeaten, but Bob Stoops has the conference’s best performing team as of Nov. 14.

The Sooners are steamrolling opposing defenses to the tune of 46 points per game, and are playing about as well defensively as a team can in the prolific Big 12. They haven’t needed the wild comebacks Oklahoma State’s ridden to three different conference games.

And yet, here are the Sooners sporting a loss — and what an ugly loss it is.

Texas dropped its sixth of the season Saturday at West Virginia, and fourth by at least 18 points. The Longhorns face Baylor Dec. 5 in a game that will likely deny Texas bowl eligibility.

Of the Horns’ five wins, one came against Oklahoma. HOW?!

The Golden Hat is now a millstone that hangs around Stoops’ neck as Oklahoma pursues a Playoff berth. Few teams vying for bids in the four-team tournament will have a loss as ugly — should North Carolina win the ACC, its Week 1 defeat to South Carolina is comparable.

If Oklahoma does get into the Playoff, I love the Sooners’ chances. Who’d guess we could have another season culminating in the national champion sporting one confounding loss?

FOURTH DOWN: In Praise of Turnarounds

When Todd Monken and Bob Davie were hired at Southern Miss and New Mexico respectively, each was taking on a cumbersome task for different reasons.

New Mexico’s largely been a punching bag throughout its football history, save pockets of success here and there. Rocky Long, the program’s most consistent head coach ever, was fired to make room for Mike Locksley.

Locksley’s two-and-a-half-season tenure was awful, on and off the field. The Lobos were arguably the worst team in the FBS throughout his reign with no hope in no sight.

I’ll fully cop to scoffing when New Mexico tabbed Bob Davie to replace Locksley. It struck me as an athletic department more focused on basketball, hiring someone who was a name for the wrong reasons.

Davie hadn’t coached in a decade when he took over at UNM, and his last foray on the sidelines ended in a tailspin at Notre Dame.

Consider my crow served with Smurf Turf, as Davie’s signature win came tonight at Boise State. The Lobos’ 31-27 defeat of Boise State not only gives New Mexico bowl eligibility for the first time since 2007: The Lobos can actually win the Mountain West’s Mountain division.

Southern Miss established itself a consistent winner through various eras of college football, but the fracturing caused by conference realignment, spurred by the Playoff, catered the Golden Eagles.

Their magical run to the C-USA championship and into the Top 25 in 2011 led to Larry Fedora’s departure for North Carolina, and Ellis Johnson’s one season as head coach was disastrous. 0-12 disastrous.

Not even Locksley-era New Mexico was that bad.

Matt Hinton’s examination of Southern Miss, its decline and the bleak outlook in college football’s brave new world was one of the best features of the offseason.

Despite the many hardships Southern Miss’ endured, and continues to face in this ever-changing landscape, the Golden Eagles will also play for a divisional championship.

Southern Miss destroyed Rice Saturday, 65-10, improving to 7-3 and 5-1 in C-USA. A win at home next week sets up a Thanksgiving weekend clash with Louisiana Tech for the West division’s berth in the C-USA Championship Game.

Tyler Matthews with a 17 yard #Touchdown to put USM up 58-0! #SMTTT pic.twitter.com/6bsezlkLRL

Monken and Davie are in the midst of two of the more impressive rebuilding projects in all of college football.