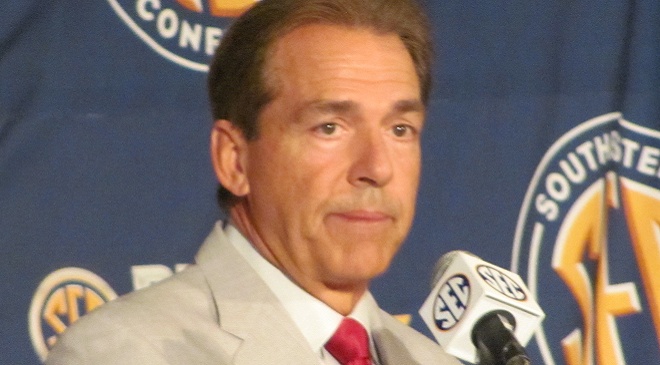 Nick Saban’s lamentations at this week’s SEC meetings that college football needs a more “level playing field” have been roundly and rightly criticized. Friend of the Site Josh Webb exposes the hypocrisy of Saban’s complaints from the perspective of Group of Five programs like Fresno State, Boise State and Marshall, via Scout.com.

Webb’s thorough examination details how Nick Saban’s Alabama Crimson Tide, and the SEC in general, have benefited from the sport’s uneven playing field. Certainly Saban has exploited the imbalance better than the rest of his conference, however, which this piece demonstrates.

My personal favorite part of this must-read column is a comparison to the current Group of Five automatic berth into the New Year’s Six and The Hunger Games.

Though the College Football Playoff generated revenue increases for all but one Group of Five conference — that one being the American Athletic, which lost money as a result of losing its BCS designation — a USA Today piece I linked to in a news roundup earlier this week details how the lavish spending at programs like Alabama is turning up the heat on the non-power programs.

Nick Saban’s idea of a “level playing field” might force programs like Fresno State to be offered as tribute.

Louisiana Tech Shuffles 2016 Schedule to Get Out of SEC West

Conference USA member Louisiana Tech may not reap the benefits of SEC membership, but the Bulldogs certainly deserved to with the 2016 nonconference schedule that athletic director Tommy McClelland inherited.

“We were in the SEC West essentially when I first took over the job,” McClelland told The News-Star on Wednesday. “My first reaction was I gotta provide our team the opportunity to be competitive. That’s just brutal.”

La. Tech faced a docket of Arkansas, Mississippi and Texas A&M. With a nonconference schedule like that, frankly the folks at the SEC Network would have had a moral obligation to mail a check for some of that record revenue to Ruston.

Ability to Adjust Keeps Pac-12 Offenses on the Cutting Edge

Six of the Pac-12’s dozen members ranked No. 36 or better in scoring offense last season, continuing the conference’s longstanding tradition of innovation on that side of the ball. Coaches Sonny Dykes and Todd Graham talk about adjusting scheme to fit personnel, and goals that might defy the conventions expected of their systems.

Dykes at Cal and Graham at Arizona State are just two examples leading the Pac-12’s latest wave of offensive ingenuity.

Former Nick Saban assistant Jim McElwain returns to the SEC, though perhaps not with the fanfare one might expect of a former national champion coordinator.

Never mind that, though. The new Florida head coach successfully restored past glory at his last stop, Colorado State, and has a proven track record of rebuilding in the areas the Gators need rejuvenation.

With Notre Dame transfer Everett Golson opting for Florida State, programs searching for a veteran fix at quarterback turn to Virginia transfer Greyson Lambert. McElwain’s Florida Gators are reportedly in the running, as Lambert is scheduled to visit Gainesville next week per 247Sports.

Lambert is also reportedly set to visit Florida rival Georgia, which faces its own, albeit slightly less dire quarterback situation heading into 2015.