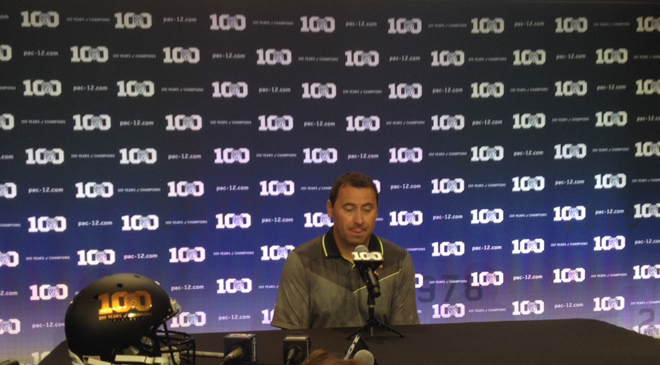 USC head coach Steve Sarkisian made a comment at Friday’s session of Pac-12 media days about emphasizing the Trojans’ tradition in recruiting, adding “we’re not going to take the field in 13 different uniforms in 13 games this year.”

At least one interpretation of Sark’s comment set off the predictable avalanche of headlines and retorts.

"We're not going to take the field this year in 13 different uniforms in 13 games this year." - Sark, taking a low-key shot at Oregon.

Now, I was at Sark’s breakout session Friday, though not for this comment. Reading the full context of the quote, which 140 characters obviously can’t convey, and having spent Sark’s first season on the USC beat, my inference is that he wasn’t taking a shot at Oregon.

Sark was never exactly the shot-taking type last season, and I don’t see why he’d choose the Pac-12’s dominant program to start. But that’s just my inference based on past experiences and my own interpretation of the full quote, which you can read in Ryan Abraham’s breakdown at Scout.

Jennings, who was there for this particular comment, infers otherwise. But it’s just that: inference. Why Oregon, which USC hasn’t played since 2012 and Sarkisian hasn’t faced since 2013? Why not Arizona, which has red, white and navy jerseys and pants with red, white navy and copper helmets?

Or Arizona State, which just unveiled new Adidas uniforms that run that full gamut of the university’s color scheme? Or maybe Cal, which has whites, gold and blues? Colorado had a social media unveiling of its uniform combinations, which include a smoky gray to go with the traditional black-and-gold.

Heck, even USC’s rival, UCLA, has worn an alternate uniforms every year since 2011. If there’s shade to be thrown from USC, it’s much more likely to be directed at UCLA than at Oregon.

Not that I see it as a shot at all, given Sarkisian’s tendency to emphasize tradition. It’s a mantra he’s repeated countless times since coming to USC.

Alas, this ordeal is an interesting exercise in the current sports media landscape. Coach makes a comment, it gets shared in fewer than 140 characters (possibly with an aside added), Twitter users react and it *pinches nose* goes viral.

Sark’s quote as tweeted by Jennings set off angry Oregon fans and at least one staffer.

Using the same headline template that these sites often use to describe embedded John Oliver takedowns paints a picture of Sarkisian going on some minutes-long diatribe about how gaudy and lame Oregon’s uniforms are.

And then, of course, is the flipside: “Oregon Twitter CRUSHES Sark.”

Folks so badly want players and coaches to be Drake and Meek Mill, dropping diss tracks on one another, when in reality, most are as guarded as possible for this very reason.

The nature of the sports media now, which is driven so much by content mills just churning out headlines void of originality or context, is anything even slightly unguarded comes out as purple monkey dishwasher.