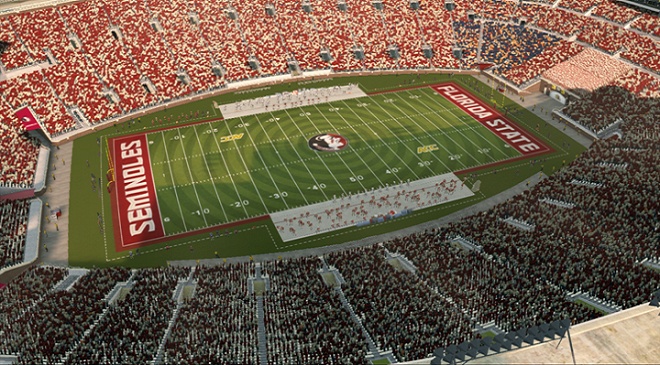 Everett Golson’s transfer to Florida State from Notre Dame evidently did not come with any assurance of the starting job. At least, that’s the implicit suggestion of Golson appearing third on the initial Seminole depth chart, released Sunday ahead of ACC Kickoff.

In the roughly six weeks before the Seminoles’ 2015 opener Texas State, the release of this depth chart could be pure gamesmanship on the part of Jimbo Fisher. Don’t expect any concrete answers from the head coach at this week’s ACC media event.

Furthermore, Everett Golson has yet to participate with Florida State in an official practices. His placement on the depth chart could be cosmetic, giving deference to the quarterbacks with experience in the program.

The situation is almost assuredly fluid, and the depth chart itself is subject to scrutiny — indefinitely suspended running back Dalvin Cook is listed No. 1 at his position, for example.

After all, Golson is a former BCS championship game participant with two years of starting experience, and was a Heisman candidate last season before the brutal last month that eventually led to his benching in favor of Malik Zaire.

Hype for Golson based on his career highs was enough to land him on the Walter Camp Award watch list.

Excitement for the new and unknown isn’t exclusive to football coverage, but it tends to go overboard with the expectations set on the gridiron. Sean McGuire may not be as intriguing as Golson, but the quarterback listed atop Florida State’s depth chart is intimately familiar with Fisher’s playbook, has established rapport within the team and played a role in a critical win last season against Clemson.

Transfers get the hype at the expense of established reserves; the same is true at Oregon, where Marcus Mariota’s understudy, Jeff Lockie, has taken a backseat among national media to Eastern Washington transfer Vernon Adams. Adams has yet to even arrive at UO.

So many expect an immediately eligible transfer quarterback to be Russell Wilson. But if Everett Golson doesn’t follow in Wilson’s shoe, as the first Florida State depth chart of 2015 suggests, he’s more rule than exception.

Kevin Sumlin, speaking at the Houston Coach’s Night fundraiser Sunday, said he’s cultivated a friendship with SEC peer Steve Spurrier. The Head Ball Coach is apparently rubbing off on Texas A&M’s fourth-year leader, because Sumlin offered up some barbs Spurrier would be proud of.

Brent Zwerneman has a blow-by-blow, but the zinger I found most intriguing was aimed at A&M Week 1 opponent, Arizona State:

“I’m sure Todd Graham will be real excited to come here. He’s the head coach at Arizona State, and we just snatched the two best players out of their state two years in a row (Kyle Allen and Christian Kirk).”

Graham has made no bones about extending Arizona State’s recruiting footprint into Texas, but Sumlin and his staff going into the Grand Canyon State to pull away two top-tier recruits reemphasizes the importance of securing ones own backyard.

The Sun Devils and Aggies showdown in Houston is a Week 1 highlight, as both enter 2015 with dark horse Playoff aspirations and high-powered offenses that should light up the scoreboard. Now, I’m even more excited for their meeting.

Oklahoma vs. Oklahoma State: The Play That Changed It All

Oklahoma State rallied to beat Oklahoma in last season’s Bedlam Game for one of the wildest decisions in the rivalry’s history, but as Kyle Frederickson details in an excellent feature for The Oklahoman, there’s so much more to the 38-35 Cowboys win.

In “The Play That Changed It All,” Frederickson examines the impact of Tyreek Hill’s punt-return touchdown in what is certainly one of the best reads of the offseason.