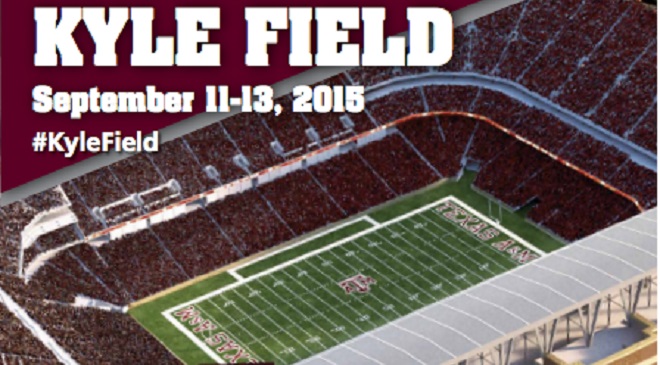 Considering how often coaches will downplay their teams’ strengths, Kevin Sumlin’s assessment can be interpreted as downright giddiness.

After an up-and-down 2014, Schroeder contrasts the Aggies’ somewhat under-the-radar outlook for the coming season, as well as the program’s rebirth under Kevin Sumlin, against the backdrop of the rebuilt Kyle Field.

Texas A&M’s is still under construction, with Schroeder reporting “dozens of workers are scurrying nearly nonstop to finish the $450 million expansion.”

That, too, is a fitting analogy for where the Aggies are just weeks out from the season opener.

Sumlin and his staff are working to iron out any issues prior to what is arguably the most intriguing matchup of opening weekend. In particular, first-year defensive coordinator John Chavis dives head-first into a massive undertaking, readying what was an often abysmal defense for Arizona State, one of college football’s most explosive teams.

Much like A&M, Arizona State’s home field is undergoing offseason renovations. And, just like the Aggies, the Sun Devils harbor ambitions of waking a sleeping giant to pursue national championships.

Arizona State head coach Todd Graham has not been shy about saying those two words, as he did in a Q&A with The Arizona Republic from Sun Devil training camp at Camp Tontazona.

For either Kevin Sumlin or Todd Graham, Week 1 will put the building project on the fast track to completion. For the other, they’ll be forced to reexamine their blueprints.

To call a team “the best 2-10” is either a condescendingly back-handed compliment, or akin to handing out a title for best smelling outhouse.

However, in the case of the 2014 Colorado Buffs, it’s a short way of describing several painful near-misses for a young lineup. CU suffered four narrow defeats in Pac-12 play, which, had they gone the other way, would have landed the Buffs in a bowl game.

“The way I see everything now is we’re definitely moving in the right direction,” head coach Mike MacIntyre told the Associated Press. “The program is growing.”

Yours truly has been banging the gong for Colorado for some time now. I’m not ready to buy the Buffs as bowl participants — a 13-game schedule with no bye week amid the brutal Pac-12 South slate isn’t conducive to seven wins — but Colorado will score some marquee wins.

One of the highest rated prospect in Texas’ 2015 signing class, linebacker Cecil Cherry, is transferring to USF less than a week into practice with the Longhorns.

Like Woulard, Cherry will not be eligible to play until 2016. That’s unfortunate for Bulls head coach Willie Taggart, who’s seeking a breakthrough after two trying seasons at USF.

SIGHTS AND SOUNDS FROM FALL CAMP

A marquee pairing in Week 1 is Minnesota’s return match with TCU. The Horned Frogs’ win over the Golden Gophers last season ended up factoring into the College Football Playoff race, as Minnesota broke into the Top 25 late in the season.

Minnesota is an intriguing dark horse in this year’s Big Ten race. Head coach Jerry Kill talks about some of the Gophers’ progress in fall camp.

All the talk of Oregon camp centers on the quarterback competition, but below is a snapshot that conveys why the Ducks will be fine with either Vernon Adams or Jeff Lockie behind center.

Frank Solich has built a consistent winner at Ohio U., but the Bobcats enter 2015 without much buzz. Might Ohio sneak into the championship race in this year’s #MACtion?