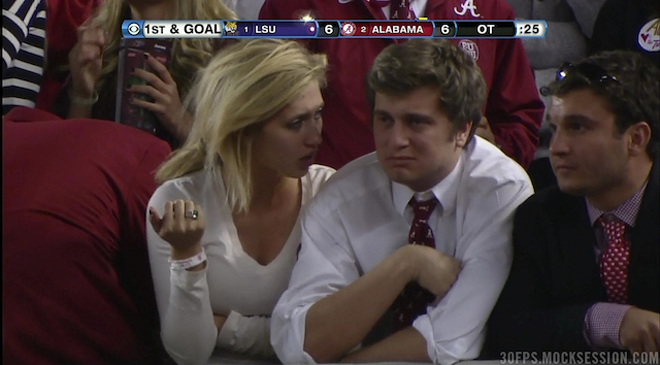 For every college football fan who hears nails running down a chalkboard every time a crowd breaks into an “S-E-C!” chant, or any conspiracy theorist who sees ranks as tools to prop up a certain conference, your frustration can be traced to one game.

Alabama vs. LSU is the first matchup of the 2015 college football season pitting teams ranked in the top four by the Playoff committee.

That distinction surely invoked eye-rolls nationwide from everyone suffering from SEC lethargy, and understandably curious why the one-loss Crimson Tide received that No. 4 spot.

The sub-plot is quite fitting, really. Saturday’s installment in the Alabama-LSU rivalry takes on the most significance of any regular-season meeting between the two in years. Dubbed “The Game of the Century” going in, the Crimson Tide and Tigers were both unbeaten and the nation’s top two ranked teams on Nov. 5, 2011.

The Game of the Century is also the game that turned sentiment squarely against the Southeastern Conference.

On that day four years ago, the stage was set for a de facto SEC West championship — which, in turn made it a BCS Championship elimination game. No two teams from the same conference ever played in the title game in the BCS era, and certainly no team that failed to win its division was ever involved.

The hype preceding Alabama vs. LSU certainly matched that of a playoff game.

LSU won 9-6, the centerpiece of a perfect regular season and conference championship. The game itself was ugly.

Now, a 9-6 score after 60 minutes-plus-overtime could be expected of two of the nation’s best defensive teams. And, in an era of defense increasingly becoming optional, such an old-school slug-fest might be refreshing.

The Game of the Century wasn’t such a contest. Alabama’s defense was great against a putrid LSU pass offense, foreshadowing what was to come two months later. But the Crimson Tide played a sloppy offensive game that included an interception thrown on a trick play to wide receiver Marquis Maze.

For those invested in the SEC mythos, Alabama vs. LSU was romanticized as “real football.” The game is meant to be an ugly slog through the mud wherein two teams rush 72 times for fewer than 250 yards, and the forward pass is as foreign as it was in 1906.

The “real football” ideal wasn’t necessarily born of Alabama vs. LSU, but that meeting certainly propped up the concept. Never mind it quietly disappearing in subsequent years, after SEC offenses at Texas A&M, Auburn and even traditionalist Georgia started to producing points in bunches.

As far as Games of the Century go, Alabama vs. LSU was arguably not as well-played as Ohio State-Michigan just five years prior, and certainly not as entertaining.

The 2011 edition of Game of the Century, as it turned out, also lacked the stakes that made Ohio State-Michigan so special.

While the idea of an Ohio State-Michigan rematch was kicked around, common sense prevailed. Coincidentally, Florida jumping Michigan in the final BCS standings began the SEC dynasty.

However, the common sense that held Michigan out of the 2007 BCS Championship Game was absent in December 2011. Alabama was granted a mulligan, playing for the national championship despite:

The 2011 season was a culmination of SEC oversaturation. The conference was already in the midst of a five-year title streak, and the 2012 BCS Championship Game ensured that streak would extend to six.

ESPN was inundating its audience with SEC-centric material, including the debut of Roll Tide/War Eagle, just days after Alabama vs. LSU.

The 2011 season was a nauseating culmination for anyone who hated the idea of college football as provincialism.

Now, differing factions will never agree on the merits of Alabama’s inclusion in the 2012 BCS Championship Game. Supporters point to the Crimson Tide’s defensive dominance of LSU in November that season, and a final reflective of the true difference between the two games when they met in January.

One could make a convincing case that Alabama team was the best in the nation, thus it’s only right the title game reflect that — though the same could be said of USC in 2008, but I digress.

But the case against Alabama that season is stronger.

The Crimson Tide beat two teams ranked in the final regular-season AP Top 25: Arkansas and Penn State. Penn State was an absolute dumpster fire by season’s end, embroiled in the Jerry Sanduksy arrest and Joe Paterno’s subsequent dismissal, and the Nittany Lions were on their way to a blowout loss against Houston in the Heart of Dallas Bowl.

That means by season’s end, Alabama played just three games against two teams ranked in the last (and thus, most meaningful) Top 25.

Oklahoma State went 3-0 against teams ranked in the final regular-season Top 25, when the BCS matchups were set. The Cowboys actually had four wins over BCS-ranked teams, as Texas A&M just sneaked into the bottom of the regular-season BCS Top 25.

The lone head-to-head argument for Alabama’s inclusion over Oklahoma State was the quality of losses rather than volume and quality of wins, which ignored BCS precedent — much like the decision to book a conference rematch.

Despite the shared inclusion in the initial top four for this year’s Alabama vs. LSU showdown, the College Football Playoff likely ensures a much less contentious aftermath. However, if we get another Alabama vs. LSU postseason rematch, anti-SEC may well climb to new heights.